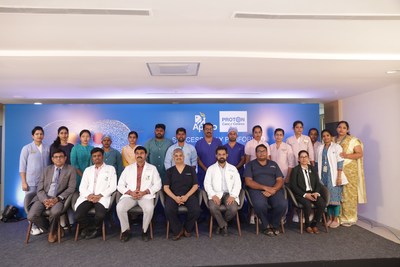 The first case to be witnessed in Asia of Moya Moya disease -- a rare blood vessel (vascular) disorder in which the carotid artery in the skull is blocked or narrowed -- reduces blood flow to the brain. The condition was diagnosed in eight-year-old twin girls. Over the years, one of the twins developed vague symptoms like jerky movements in the right hand and leg. The requested MRI scan of the brain showed that the blood supply to the brain was significantly compromised on both sides of the brain, especially on the left. These episodes originally thought to be as seizures were a form of multiple mini-strokes often called limb-shaking epilepsy, which signifies compromised blood circulation to the brain. Since the girls were twins, both were scanned and showed similar MRI findings. The children were examined by a senior neuro-physician, who diagnosed this condition as Moya Moya disease.

The neuro-sciences team led by Dr. Roopesh Kumar, Senior Consultant, Neurosurgeon, APCC further examined the children using MRI brain perfusion. The findings were almost similar in both twins and the left side was more affected than the right. Due to the lack of medicines for the disease, the doctors offered surgical intervention via a brain bypass surgery wherein the blood supply from the skin of the head would be diverted into the brain through a window created on the skull bone. The surgery, STA-MCA bypass, was performed initially for the symptomatic child. And on the second day, the other child also underwent a similar procedure.

Dr. Roopesh Kumar, Senior Consultant, Neurosurgeon, Apollo Proton Cancer Centre, said "The surgery to ensure good blood flow in the left brain and reduce the chances of strokes to a minimum, was successful and was well adapted to the body. The timely decision to perform this complex surgery helped in saving lives at the right time. At APCC, high-risk cases are managed in a specialised tertiary centre with excellent facilities. The advanced surgical techniques and availability of technology in combination with expertise improves the chances of saving a patient's life even in critical complications."