A Salute to the Brave - Honoring our Veterans & First Responders

The season's goodbye wave offers HALF off admission the last weekend, November 11 and 12

KANSAS CITY, Mo., Nov. 9, 2022 /PRNewswire/ -- Brave souls make their way through Kansas City's West Bottoms District of haunted attractions: Beast, Edge of Hell, and Macabre Cinema throughout the limited season. As the haunted houses enter this final weekend, Veterans Day, November 11 and November 12, the attractions will honor the brave US Veterans and First Responders. In recognition of their service ? all souls can get half-off admission tickets. There has been a tradition for veterans, police, and firefighters to get discounted tickets to these acclaimed haunted houses on select dates. Since COVID, the discounts have also applied to first responders, which includes ambulance and healthcare workers. Given that more people are making up for lost time and prioritizing experiences, the management of the haunted attractions decided to add this last weekend to give more people a chance to come and save, particularly haunt fans among veterans, police, fire department, and healthcare workers. This goodbye for the season will also offer half-off admission tickets - no strings attached.

Amber Arnett-Bequeaith, the Queen of Haunts, vice president, and spokesperson for this trio of attractions, explains the special closing offer. "We wanted to make a big splash to honor Veterans and First Responders. These special Americans sometimes lose their lives and family time to help sustain society as we know it. As a result, our part of celebrating them is to make this deep discount available to their whole group, including family and friends," Arnett-Bequeaith added. "When we cast the net that wide, it just makes sense to include everyone. Everyone can salute those that made this possible. Anyone who missed going has a second chance for a fun fright night of thrills."

Macabre Cinema was closed last weekend but will re-open for these encore shows on Friday and Saturday at 8 pm. Beast and Edge of Hell open on the same nights at 7:30 pm. The Queen of Haunts added that they'd close once the line goes through, so it's recommended to get there before 10 pm.

About the Haunted Attractions:

The Beast, Edge of Hell, and Macabre Cinema are world-class haunted house attractions that the Queen of Haunts and her family preside over in Kansas City. Edge of Hell is the oldest haunted attraction still operating in the US, with its 1975 launch by the original haunt queens, the Queen of Haunts' mother and grandmother. The haunted attractions have always made charities central to their operations, primarily focused on children and pet charities in the community. These massive haunts in towering century-old buildings are located in the Historic West Bottoms Entertainment District near Downtown Kansas City, Missouri. Additional attractions include the Ghost and Gangsters Ghoul Bus Tour, Festival of the Full Moon, and the Full Moon Escape rooms. 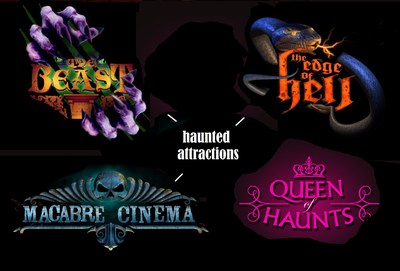