Molson Coors Brings Lineup of Beer, Hard Seltzer and Non-Alc to the PPA, Starting This Fall

CHICAGO, Oct. 6, 2022 /PRNewswire/ -- Molson Coors Beverage Company (NYSE: TAP) today announces a new partnership with the Professional Pickleball Association (PPA). The new agreement will pair the company's iconic beverages with one of the hottest sports in the United States and will make Vizzy the first-ever "Official Hard Seltzer of the PPA Tour." 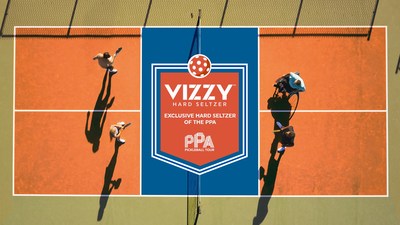 Described as a cross between tennis, badminton and ping-pong, pickleball has been around since the 1960s, but saw a national resurgence during the pandemic. Since then, it's exploded in popularity, drawing in 4.6 million players and becoming the nation's fastest-growing sport, according to the Sports & Fitness Industry Association.

"When watching a sport like pickleball, you need to drink something just as bold and fun?which is why we're so excited to match the wide variety of the Molson Coors portfolio with the PPA as their official alcohol beverage partner," said Bill Averill, Molson Coors' vice president of field marketing. "Led by our vibrant and flavorful Vizzy Hard Seltzer family, which includes everything from tropical fruit to mimosa flavors, we can't wait to serve a whole new vibe on and off the court and establish Vizzy as the leading hard seltzer playing in pickleball."

Vizzy will go big to bring this partnership to life across all touchpoints including on-site activations at events, out-of-home advertising, retail, merch, as well as digital and social media influencer content. This builds on Vizzy's momentum as a top 5 hard seltzer as the brand continues to widen the gap between declining, competing brands in the category according to IRI multi-outlet and convenience data.

As the exclusive beer, hard seltzer and flavored malt beverage partner of the PPA, Molson Coors will also bring Miller Lite and offerings from its above premium innovation portfolio, like Simply Spiked Lemonade, to select PPA tournaments across the country. Plus, pickleball fans will also be able to enjoy non-alc products from Molson Coors including ZOA Energy and ZenWTR alkaline water, which will join the PPA's existing assortment of non-alc offerings.

"Pickleball isn't just a sport, it's a lifestyle, and those who know the game can testify to the fact that pickleball brings together some of the best things in life ? family, health, fun ? the list goes on," said Connor Pardoe, Commissioner and CEO of the PPA Tour. "Bringing aboard Molson Coors and Vizzy Hard Seltzer builds on this idea and helps bring people together whether they're competing on-court or cheering from the sidelines."

The Molson Coors and PPA partnership kicks off with the PPA Championship in Las Vegas this week.

For more than two centuries, Molson Coors has been brewing beverages that unite people for all of life's moments. From Coors Light, Miller Lite, Molson Canadian, Carling, and Staropramen to Coors Banquet, Blue Moon Belgian White, Leinenkugel's Summer Shandy, Vizzy Hard Seltzer, Topo Chico Hard Seltzer, Simply Spiked Lemonade, Creemore Springs and more, Molson Coors produces some of the most beloved and iconic beer brands ever made. While the company's history is rooted in beer, Molson Coors offers a modern portfolio that expands beyond the beer aisle with sparkling cocktails, canned wine, kombucha, cider and more.

The Professional Pickleball Association is the professional tour for the sport of pickleball, organizing events and rankings for the top male and female pickleball players worldwide and awarding nearly $3 million in annual prize money offering equal play and pay. With more than 20 events in 2022 at world-class facilities like the Lindner Family Tennis Center in Cincinnati, Riviera Country Club in California, and Las Vegas destinations at the Darling Tennis Center and Mandalay Bay, the PPA Tour is the premier provider of professional and amateur events. Founded in 2018 and based in Dallas, TX, the PPA Tour provides an unparalleled experience for all, inviting players to compete and "play where the pros play," as well as offering unrivaled venues, food/beverages, live entertainment, VIP experiences, giveaways and games, pro player meet-and-greets, shopping, vendors, and more. For more information, go to www.ppatour.com. See Player Profiles and follow us on social: Twitter Instagram YouTube Facebook LinkedIn