The Plastic Collecting Billboard will act as a symbol to raise awareness of the pollution rivers endure, which ultimately flows into the ocean 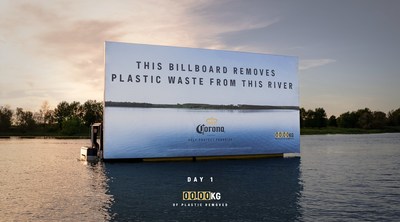 TORONTO, Sept. 27, 2022 /CNW/ - Corona Canada is committed to helping protect and raise awareness for Canada's natural environment. As a continuation of this commitment, the brand has launched a Plastic Collecting Billboard ? a floating billboard that will collect waste from the St. Lawrence River in Boucherville, Quebec, throughout the month of September, until October 19th, 2022. The St. Lawrence River was selected as the location based on its role as the connecting waterway from the Great Lake system to the Atlantic Ocean, meaning the plastic pollution found in the St. Lawrence River can flow directly into the Atlantic Ocean.

Based on a 2021 statistic from Science Advances, 80 per cent of ocean plastic comes from 1,000+ rivers, globally, that feed into the ocean1.

"Since one-fifth of the world's freshwater resources are located in Canada, the goal of the Plastic Collecting Billboard is to act as a symbol to raise awareness of the pollution rivers endure ? ultimately flowing into the ocean ? and to reinforce Corona's commitment to helping remove waste from our shorelines and waterways," said Mike Bascom, Sr. Marketing Director, Corona Canada. "As a brand that was born at the beach, Corona is invested in helping to protect Canada's natural environment, which is why we continue to launch initiatives ? like the Plastic Collecting Billboard ? to help educate and encourage Canadians to take action to reduce their plastic pollution."

Additionally, Corona wants to go beyond raising awareness and provide consumers with an opportunity to learn about their personal contribution of single use plastic pollution. With expert advice provided by Ocean Wise, Corona has created an online tool, the Corona Plastic Challenge, that will help Canadians understand the impact of their own plastic pollution footprint and provide helpful tips on how to reduce single plastic use.

The Corona Plastic Challenge tool is able to calculate an approximation of the user's plastic footprint by prompting them with a series of questions about consumption, garbage disposal process and general daily habits. Based on the answers provided by the user, the tool is then able to calculate an approximate number of kilograms of plastic the user is responsible for, per year.

"In addition to collecting waste from the St. Lawrence River in Quebec, Corona's Plastic Collecting Billboard program will provide our team at Ocean Wise with some information, during the time the billboard is operating, that can be used to help quantify how much plastic pollution is flowing through the St. Lawrence River," said Jeff Wint, Plastic Reduction Manager, Ocean Wise. "As a result, we can hopefully start to get an idea of the items being littered, types of plastic, and their sources."

Corona Canada's Plastic Collecting Billboard is just one of the brand's global initiatives, as part of its ongoing commitment to help protect shorelines and waterways. To help reduce the amount of waste from flowing into the ocean in the first place, Corona has launched river interception programs in Indonesia and Ecuador and is in the process of building infrastructure to do so in Guatemala in 2023.

To learn more, visit coronaextra.ca/ProtectParadise and join the conversation on social @coronacanada.

First brewed in 1925, Corona is a pioneer in the beer industry by being the first to use a transparent bottle showcasing its quality to the world. No Corona is complete without the lime. Naturally adding character, flavour and refreshment, the lime ritual is an integral part of delivering an experience that is truly unique to Corona. The brand is synonymous with the beach and celebrates time outdoors. It invites people to pause and reconnect with our essential nature. For more visit https://www.coronaextra.ca

Corona Canada has an ongoing commitment to environmental conservation and improving its production practices. Last year, Corona Canada piloted a new type of revolutionary packaging for six-pack beer bottles, becoming the first global beverage brand to use 30 per cent surplus barley straw and 70 per cent recycled paper fibres to create an innovative carboard packaging solution. Additionally in 2021, Labatt Breweries of Canada also announced another technology-based packaging advancement with the introduction of KeelCliptm ? a state-of-the-art packaging system that will use 65 per cent less cardboard than our previous cardboard carton ? which will be used on Corona six-pack beer cans. In June 2022, Corona Canada piloted Canada's first specially-marked, low carbon beverage can. As part of this limited release, 1.2 million cans were produced with a QR code to inspire consumers to learn more about the cans' low carbon footprint.