/THIS PRESS RELEASE IS NOT FOR DISTRIBUTION IN THE UNITED STATES OR TO U.S. NEWS AGENCIES/

CALGARY, AB, Aug. 16, 2022 /CNW/ - Tidewater Midstream and Infrastructure Ltd. ("Tidewater" or the "Company") (TSX: TWM) is pleased to announce the successful closing of its previously announced refinancing plan, consisting of a $130 million increase in the size of its Senior Credit Facility to $550 million and an approximately $92.5 million equity offering, fully funding the redemption of  its $125 million senior unsecured notes due December 19, 2022 and repayment of its $20 million second lien term loan due October 31, 2022.?  The completion of the refinancing plan simplifies the balance sheet, lowers Tidewater's leverage and cost of capital, extends the Company's debt maturity profile and provides significant additional liquidity from the increase in the size of the Senior Credit Facility. Proceeds from the offering coupled with underwriter's over-allotment option exercise have enabled Tidewater to cancel its initially proposed second lien facility, helping to reduce the Company's cost of capital and simplify its capital structure. 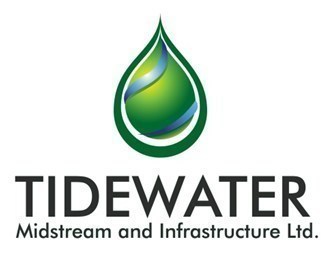 The refinancing plan consisted of a bought deal equity offering of 48,392,000 units of the Company (the "Units" as defined below) at a price of $1.20 per Unit (the "Offering Price") for aggregate gross proceeds of approximately $58 million (the "Public Offering"), a concurrent offering of 28,750,000 Units to Birch Hill Private Equity Partners Management Inc., LP and certain affiliated entities controlled by ?Birch Hill, (collectively, "Birch Hill")?, funds managed and advised by Kicking Horse Capital Inc. ("Kicking Horse Funds" and "Kicking Horse" respectively) and officers of the Company at the Offering Price for aggregate gross proceeds of $34.5 million on a non-brokered private placement basis (the "Private Placement") (the Private Placement, together with the Public Offering, the "Offering"). The Company increased the size of its credit facility by ?approximately 30% to ??$550 million, with the facility's maturity date remaining unchanged at ?August 18, 2024 through an expanded syndicate of lenders that include two of Canada's largest banks. The previously announced upsizing of the Public Offering coupled with Underwriters' (as defined below) over-allotment option exercise have enabled Tidewater to cancel its initially proposed second lien facility from Birch Hill.

Each Unit is comprised of one common share of the Company (each a "Common Share") and one-?half of one common share purchase warrant (each full warrant, a "Warrant"). Each Warrant entitles ?the holder to acquire one Common Share from the Company at a price of $1.44 per Common Share ?until August 16, 2024.? The Warrants issued in connection with the Public Offering are expected to begin trading on or about August ??16, 2022?.

The Offering was completed pursuant to a short form prospectus dated August 9, 2022 (the ???"Prospectus") filed in each of the provinces of Canada, and in the United States on a private placement basis to ??qualified institutional buyers pursuant to an exemption from registration requirements in Rule 144A of ??the United States Securities Act of 1933, as amended (the "U.S. Securities Act"). The Offering is subject ??to the final acceptance of the TSX, which has conditionally accepted the Offering. ?

In connection with the financing plan and the investment by Kicking Horse in the Private ?Placement, Thomas P. Dea has joined the Board of Directors of the Company. Mr. Dea is the President and Chief Executive Officer of Kicking ?Horse, a Toronto-based investment manager focused on concentrated investment strategies in public equities, distressed debt, and special situations.

The Company and Kicking ?Horse have entered into a board nomination agreement whereby the Company will agree to nominate Mr. Dea, or ?another Kicking Horse nominee, so long as the Kicking Horse Funds hold at least 2% of the issued and outstanding ?Common Shares.?

The involvement of management and Birch Hill in the Offering are "related party transactions" ?within the meaning of MI 61-101 and the Company is relying on the exemptions in sections 5.5(a) and 5.7(a) [Fair ?Market Value Not More Than 25% of Market Capitalization] of MI 61-101 in connection with such transactions, as the ?aggregate fair market value of such transactions does not exceed 25% of the Company's current market capitalization, as determined in accordance with MI 61-101?.? Readers are directed to the Material Change Report filed on SEDAR on August 8, 2022 for further information relating to the "related party transactions" involving Birch Hill and management. Readers are also directed to the Early Warning Report filed on SEDAR by Birch Hill on August 2, 2022 for more information regarding the Birch Hill holdings.

Stifel FirstEnergy acted as financial advisor to the special committee of the board of directors in relation to the Company's refinancing plan.

This press release shall not constitute an offer to sell or the solicitation of an offer to buy nor shall there be any sale of the securities in the United States or in any other jurisdiction in which such offer, solicitation or sale would be unlawful. The securities have not been registered under the U.S. Securities Act of 1933, as amended, and may not be offered or sold in the United States absent registration or an applicable exemption from the registration requirements thereunder.

Tidewater is traded on the TSX under the symbol "TWM". Tidewater's business objective is to build a diversified midstream and infrastructure company in the North American natural gas, natural gas liquids, crude oil, refined product, and renewable energy value chain. Its strategy is to profitably grow and create shareholder value through the acquisition and development of conventional and renewable energy infrastructure. To achieve its business objective, Tidewater is focused on providing customers with a full service, vertically integrated value chain through the acquisition and development of energy infrastructure, including downstream facilities, natural gas processing facilities, natural gas liquids infrastructure, pipelines, railcars, export terminals, storage, and various renewable initiatives. To complement its infrastructure asset base, the Company also markets crude, refined product, natural gas, NGLs and renewable products and services to customers across North America.

Throughout this press release and in other materials disclosed by the Company, Tidewater uses a number of financial measures when assessing its results and measuring overall performance. The intent of non-GAAP measures and ratios is to provide additional useful information to investors and analysts. Certain of these financial measures do not have a standardized meaning prescribed by GAAP and are therefore unlikely to be comparable to similar measures presented by other entities. As such, these measures should not be considered in isolation or used as a substitute for measures of performance prepared in accordance with GAAP. For more information with respect to financial measures which have not been defined by GAAP, including reconciliations to the closest comparable GAAP measure, see the "Non-GAAP Measures" section of Tidewater's most recent MD&A which is available on SEDAR.

In particular, this press release contains forward-looking statements pertaining to but not limited to the following: