LAS VEGAS, Aug. 12, 2022 /PRNewswire/ -- Since its launch in February, Marshall Inu has grown to well over 10,000 holders, partnered with 500+ MMA fighters, and donated over $4.5 million to support MMA fighters worldwide no matter what stage they are in their careers. 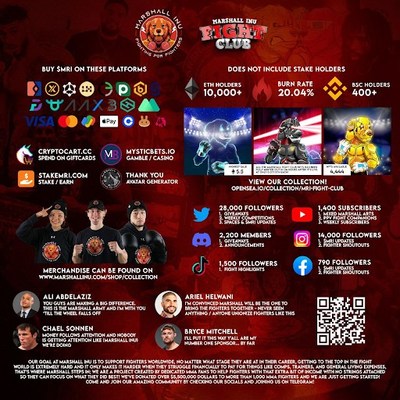 The Marshall Inu team knows that getting to the top in MMA is extremely hard - and it only makes it more difficult when fighters struggle financially to pay for essentials like comps, trainers, and general living expenses.

That's where Marshall steps in: this is a project created by dedicated MMA fans to help fighters with that extra bit of income, with no strings attached, so they can focus on what they do best? fight!

More than a meme token, MRI has manifold utility; holders can buy exclusive Marshall Inu merch using MRI and can bet on a variety of sporting events through their partnership with Mystic Bets.

Additionally, this "Fight Club" NFT series grants revolutionary benefits and exclusive access to holders including income generated from their nascent OTC trade desk which will be split between NFT holders.

Another exclusive benefit NFT holders enjoy is perpetual entries into a lossless lottery where loyal holders can have regular chances to win UFC tickets, win a trip to Fighter meet and greets, and win access to exclusive events such as the Marshall Mansion nights where MMA superstars, crypto legends & #MRIFC holders party and mingle in luxury.

The most recent Marshall Mansion experience was just last weekend at UFC Texas and was a resounding success. Holders of three or more MRI: FC NFTs can have their chance to win this all-inclusive experience for the highly anticipated UFC280 in October headlined by Oliveria v Makhachev!

In the near future, $MRI will launch their own sportsbook and release a P2E game exclusively for MRI: FC holders and there are plans afoot to develop Marshall Inu's very own grassroots fight league! The future is bright for MMA athletes and the Marshall Inu family, don't fade this crypto dog!

Marshall Inu was designed to help MMA fighters succeed with an extra source of income. As a passionate group of MMA enthusiasts, the Marshall Inu team is on a mission to merge the worlds of MMA and meme coins to do something good with the Marshall Inu community. Marshall Inu is currently partnered with over 500+ MMA fighters, and has gifted over $4.5 million to these talented fighters from all walks of life to support the present and future of MMA!