Countries that play together, trade together - DIT launches first of a kind trade and investment campaign at Commonwealth Games

LONDON, July 28, 2022 /CNW/ -- A new trade promotion campaign will target everywhere from Vancouver to Vanuatu as the Commonwealth Games kicks off in Birmingham. 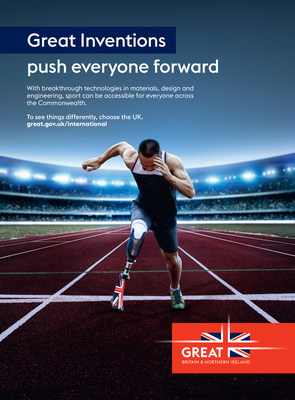 The Commonwealth makes up a third of the world's population ? ranging from the world's second most populous nation (India's 1.4bn people) to its second smallest (Nauru's 13,000). Total trade with the Commonwealth was £120.6bn in 2021, accounting for 9.4% of the UK's total trade.

And now an ambitious new campaign from the Department for International Trade (DIT) aims to reach each and every other country in the Commonwealth ? thought to be a first for an international trade promotion campaign.

In addition to more well-known outlets such as Canada's Globe and Mail, the NZ Herald and The Gleaner of Jamaica; the campaign will also feature in the Vanuatu Business Review, the Togo Presse and The Mihaaru of the Maldives.

It will spotlight businesses across the Commonwealth, showcasing why the UK is the best place in the world to invest, with our world-class talent, high spending consumer market and business-friendly regulatory landscape. It will also highlight our fantastic exporters to help stimulate global demand for British goods and services.

"The Commonwealth is made up of some of the world's most diverse and dynamic economies and stretches right across the globe."

"With its GDP forecast to jump by nearly 40 per cent over the next five years, we have a massive opportunity to turbocharge trade with Commonwealth countries."

"This exciting campaign, reaching out to some nations for the first time, will raise awareness of the exciting opportunities to boost two-way trade, drive business and economic growth and support local communities."

The new initiative is part of the wider GREAT Global Trade Campaign and is designed to showcase the success of trade and investment with the Commonwealth and encourage more businesses to trade.

The Commonwealth represents a major consumer market for UK exporters. It also offers incredible opportunities for investment, with countries like India and Nigeria among the world's fastest-growing global economies.

Investment between Commonwealth nations is already 27 percent higher than with countries outside the association. And bilateral trading costs are on average a fifth lower due to shared language and legal and economic systems ? known as the 'Commonwealth Advantage.'

Running from this month to March 2023, the marketing campaign will capitalise on key moments in 2022, including the Commonwealth Games, Mobile World Congress Africa and COP 27.

It will target key senior business decision makers with a print, paid social, partnership and PR activation in all the 55 other Commonwealth member states.

"It builds on the proven success of previous international campaigns such as Invest in GREAT Britain and Northern Ireland, and GREAT Ready to Trade supporting the UK's economic recovery from Covid-19 and spearheading trade promotion plans around the world."

The campaign will position the UK as a world leader in green technology and finance, collaborating with global businesses to drive Net Zero goals.

The team will engage with devolved administrations and Local Enterprise Partnerships (LEPs) across England, such as the Midlands Engine and Northern Powerhouse, as part of marketing activity. This will help drive regional growth and support the UK's levelling up agenda.

Every day, businesses all over the Commonwealth choose to partner with the UK for the highest quality products and services.