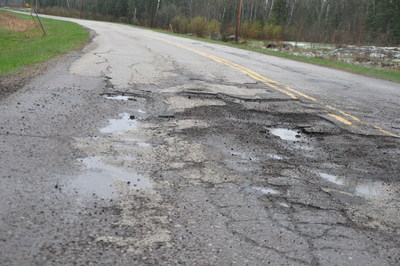 "This is the first time a rural road has made the top of our list," says Mack.

"But it's not a surprise ? more rural roads have been making our Top 10 list as the annual contest goes on."

A resident who lives near Otter Falls, which is in the Whiteshell off of PR 307, tells CAA Manitoba that the road is even worse in the winter ? thanks to how much the road heaves in the cold.

"It just comes up and if you aren't careful, you go flying," he says, noting the province has erected warning signs, but has not fixed the heaving.

Last week, the road was closed due to overland flooding, which should be a wake-up call to governments, says Mack.

"Climate change affects our infrastructure as much as anything else," she says. "We need to be pro-active in preparing our roads so these vital community links, especially in rural Manitoba, are not cut off."

Winnipeg's Saskatchewan Avenue came in second due to its numerous patches and potholes ? including one pothole that was so deep, a local man took a photo of himself standing waist-deep inside it.

It's not just potholes that CAA Manitoba asked Manitobans to think about when voting for their worst road.

Lack of active transportation paths, lack of safe and accessible access, poor or no signage, bad design or poor maintenance all went into this year's voting.

Last year's winner, Taylor Avenue, dropped off the provincial Top 10 list thanks to recent reconstruction efforts by the City of Winnipeg, but is still in the Top 10 list for Winnipeg.

"This contest provides a snapshot of what Manitobans are experiencing out on our roads. We are pleased to see some of the usual roads on our list get moved down or fall off as local governments take action," says Mack.

"We are here to advocate for the safest roads possible for Manitobans ? no matter whether they drive, bike, use transit or walk."

CAA Manitoba is a trusted Member-based organization that provides products and services that are essential to Members' safety and peace of mind. With more than 210,000 Members in the province, CAA Manitoba advocates on issues such as road safety and infrastructure, the environment, seniors' mobility, and consumer protection. From legendary 24-hour emergency roadside assistance to expert automotive, travel and insurance services, a CAA Manitoba membership offers a great range of savings, rewards, and benefits. For more information, visit caamanitoba.com.