/NOT FOR DISTRIBUTION TO U.S. NEWSWIRE SERVICES OR FOR DISSEMINATION IN THE UNITED STATES OF AMERICA/

MONTREAL, May 16, 2022 /CNW/ - Bold Capital Enterprises Ltd. ("Bold") (TSXV: BOLD.P) is pleased to provide shareholders with an update with respect to its previously announced (see March 17, 2022 press release) proposed arm's-length acquisition (the "Transaction") of SinuSafe Medical Ltd. ("SinuSafe"), a corporation formed under the laws of Israel.

Concurrent with the closing of the Transaction, Bold intends to complete a non-brokered private placement (the "Private Placement") of units of Bold (the "Bold Units"), at a price of $0.20 per Bold Unit (the "Offering Price"), for aggregate gross proceeds of a minimum of $6,500,000 and a maximum of $9,000,000.  Each Bold Unit is intended to be comprised of one Bold Common Share and one common share purchase warrant (a "Bold Warrant").  Each Bold Warrant is intended to be exercisable for one Bold Common Share at a price of $0.25 for the first year and thereafter at a price of $0.35 for the second year following its issuance. It is currently anticipated that the Private Placement will be non-brokered, however Bold may engage registered dealers or finders to assist in identifying eligible accredited investors and pay a commission in respect thereof.  The final terms of the Private Placement are subject to change.

Proposed Management and Directors of the Resulting Issuer

Mr. Avinoam Gemer, CEO & Co-Founder of SinuSafe. Prior to SinuSafe, Avinoam was the CEO of ToeFix, leading the company from concept to working product, FDA and CE, manufacturing, distribution agreement, and sales. In addition, Avinoam was a medical device associate at Peregrine Ventures. He participated in investments in companies such as Memic and Cordio. In 2014 Avinoam started SinuSafe to cure his Chronic Sinusitis, which he did in 2019.  Avinoam holds a MBA from Ono Academic College, Israel, and a BA in Psychology and Criminology (with honors) from Bar ? Ilan University, Israel.

Mr. Stuart Hendry, CCO, Global Commercialization Officer of SinuSafe. Stuart has been working in the Sinusitis market for the last 16 years. He was VP in Acclarent (J&J); ENTellus (Stryker) before and after the acquisitions for $780M & $650M. Both companies developed medical devices for Chronic Sinusitis and grew their sales to more than $100M. Stuart built their EU sales organizations from 0 to $15-25M in a few years.  Stuart holds a BSc Hons in Business from the University of Bath, United Kingdom.

Mr. Nir Altman, CTO & Co-Founder of SinuSafe. Nir holds a MBA from Ben-Gurion University in Israel and B.SC. in mechanical engineering from Tel Aviv University in Israel. Prior to his role at SinuSafe, he was the R&D Manager of THD Lap and VP R&D of Easy-Notes Ltd. and Easy-Lap Ltd., among others. Nir led the R&D activities as a senior engineer, was responsible for design for production, and established the production lines. In addition, Nir led manufacturing and quality improvements and cost reduction processes. Nir was involved with the design of many medical products and he has written dozens of patents.

Bold and SinuSafe are in the process of selecting a CFO for the Resulting Issuer.

Prof. Benad Goldwasser,MD MBA, Chairman of the Board of Directors

Prof. Goldwasser is an emeritus professor of surgery (urology), inventor, entrepreneur and venture capitalist with extensive experience leading high growth, publicly-traded medical device companies. He co-founded Vidamed Inc., which was acquired by Medtronic Inc. (NYSE: MDT) and co-founded Medinol Ltd., in partnership with Boston Scientific (NYSE: BSX). Prof. Goldwasser has served as Chairman at Save Foods, Inc. (OTC: SAFO) since May 2018 and as Chairman of ScoutCam Inc. (OTC: SCTC) since March 2019, as well as a Director at Innoventric Ltd. since September 2017. He is also currently the Chairman at Inspira Technologies Oxy BHN Ltd. (NASDAQ:IINN). He is the former Chairman of Medigus Ltd. (Nasdaq and TASE: MDGS) and was a consultant to the Shanghai-Israel Investment Fund. In 2016 Prof. Goldwasser launched a venture capital fund partnered with Shanghai Alliance Investment Ltd (SAIL), a Shanghai Government investment company. Prof. Goldwasser holds a MD and MBA from Tel-Aviv University, Israel.

Mr. Danny Hadar is a Managing Director at Fosun RZ Capital, focusing on investments in Israel and the region. Previously, he was a founder and managing partner in Soluna Ventures (VC and seed investments) and partner in Peregrine Ventures (life sciences and enterprise software fund).  Mr. Hadar holds a MBA, International Business, from Duke University, USA, a MA, Diplomatic studies from Tel-Aviv University, Israel and a BA, Computer Science from the Academic College of Tel-Aviv.  Mr. Hadar is also a co-founder of SinuSafe.

Mr. Avi Yaron is a general partner in HealthYA Ventures Lab and was a managing partner in Joy Venture Capital. Previously, he was founder and CEO of Visionsense Corp. (acquired by Medtronic), which develops and sells 3D scopes for neurosurgeries, including via the nose.  Mr. Yaron is currently the executive chairman of SinuSafe.  Mr. Yaron holds a MSM from Boston University, USA, a BSCEE in Electrical Engineering from Tel-Aviv University, Israel and a attended the management and entrepreneurship program at Technion Institute of Management, Israel.

Mr. Peter Rona is currently the Chief Executive Officer and a Director of Bold. Mr. Rona completed his Bachelor of Arts degree at Concordia University in 1970, and in 1973, Mr. Rona also completed a Management Certification at McGill University. Since May 2013, Mr. Rona is the Chairman of CPNA, a Procurement Service Provider, distributor and reseller of furniture and accessories to the hospitality industry. Prior to that, he was Chief Operating Officer of Smart Energy Instruments Inc., an Ontario-based corporation developing a smart grid sensor, selling evaluation boards, chipsets, software and technical support to speed specific OEM products to market. From 1985 to 2000, Mr. Rona had a 16-year experience in public companies. As Chief Executive Officer, President and Director of Networks North, Inc. (NASDAQ: NETN) (currently Chell Group Corporation), he took the corporation public on the NASDAQ Exchange (small cap), participated in several rounds of equity financing and conducted three corporate acquisitions. The companies included were NTN Canada, NTN Sports Inc., Magic Lantern Communications and Interlinx Multi Media Inc.

The following table presents selected financial statement information on the financial condition and results of operations for SinuSafe. Such information is derived from the unaudited financial statements of SinuSafe for the fiscal years ended December 31, 2021, 2020, and 2019. The information provided herein has been prepared in accordance with IFRS and should be read in conjunction with the financial statements of SinuSafe for the years ended December 31, 2021 and 2020, which will subsequently be audited, and which will be filed on SEDAR when Bold files its filing statement with respect to the Transaction.  SinSfe does not current generate any material revenues.  All amounts are presented in thousands of Israeli Shekels ("K NIS" in the below excerpt; one Israeli Shekel is approximately $0.38 Canadian dollars). 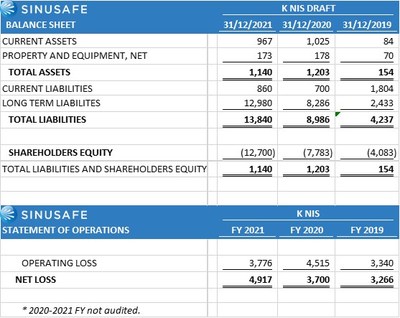 Bold has executed a secured loan agreement with SinuSafe pursuant to which it has loaned SinuSafe the principal amount of $350,000. The loan is secured (first rank) against the core assets of SinuSafe, namely its patent and patent applications, has a term of 12 months, and bears interest at an rate of 5% payable at maturity.  If the Transaction is not completed, then Bold may accelerate the maturity date of the loan.

Trading in the common shares of Bold has been halted and is not expected to resume until the Transaction is completed.

Investors are cautioned that, except as disclosed in the management information circular or filing statement to be prepared in connection with the Transaction, any information released or received with respect to the Transaction may not be accurate or complete and should not be relied upon. Trading in the securities of a capital pool company should be considered highly speculative.

The TSX Venture Exchange Inc. has in no way passed upon the merits of the proposed Transaction and has neither approved nor disapproved the contents of this press release.

The securities have not been and will not be registered under the United States Securities Act of 1933, as amended and may not be offered or sold in the United States absent registration or an applicable exemption from the registration requirement. This press release shall not constitute an offer to sell or the solicitation of an offer to buy nor shall there be any sale of the securities in any jurisdiction in which such offer, solicitation or sale would be unlawful.