Surge of Momentum in Bipartisan Effort for Sugar Industry Reform

STUART, Fla., May 12, 2022 /PRNewswire/ -- VoteWater, a Florida-based group with a mission to fight political corruption and defend the public's right to clean water, today announced the launch of the No Big Sugar Campaign (www.nobigsugar.com), a landmark effort to end the influence of Big Sugar money in politics and free elected leaders to act in the best interest of their communities. 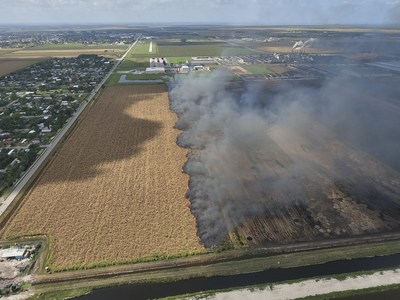 Big Sugar is a network of private companies that exploits special government treatment to rake in billions on the backs of American consumers and communities, killing local jobs and poisoning our air and water.

The campaign's goal is to prove that Big Sugar money is a liability, not an asset ? members of Congress and candidates are better positioned to win elections without being on the take. The vehicle for advancing this goal is an open letter and pledge to reject political contributions, direct and indirect, from Big Sugar. Candidates and public officials can take the pledge; meanwhile, advocacy groups, businesses, and the general public can sign the open letter to show support for the effort.

"The energy behind this campaign is unlike anything we've seen," said Gil Smart, VoteWater's executive director. "Change is in the air. Floridians across the political spectrum have had enough of this industry's toxic impact. So we charge ahead, knowing the industry will fight to keep the system rigged, but also knowing real reform is possible."

Social and Political Changes Set the Table for Bipartisan Reform

In the past, free-market advocates, opposed to the industry's federal handout, led the reform fight with support from sugar-using American companies. (Current federal policy requires American companies to pay far more sugar than their international counterparts.)

But American politics has changed in ways that open new paths to sugar policy reform. With the emergence of movements for social justice (Black Lives Matter), national concern about damage to our natural resources (Florida's toxic algae blooms), and bipartisan anger over political corruption, there is an opportunity to build a diverse, bipartisan reform coalition unlike any we've seen before.

Florida lawmakers have long served as Big Sugar's most useful line of defense. But times are changing, including in Florida's 20th Congressional District. For the first time in decades, the home district of US Sugar elected a member of Congress ? Sheila Cherfilus-McCormick ? who did not take money from Big Sugar during the campaign and called the industry out for its political corruption and environmental abuse. In 2020, she said "all industries that take part in practices that jeopardize human health through pollution must be regulated and fined. This includes Big Sugar, who has silenced legislators by donating large amounts to their campaigns." Just as important, seven other candidates on both sides of the aisle took a VoteWater "no Big Sugar money" pledge.

Piggybacking on the FL-20 special election, this campaign launches with support from a diverse set of Florida groups, including Muck City Black Lives Matter, Florida Clinicians for Climate Action, Florida Council of Churches, Florida Keys Outfitters and the Florida Chapter of the Sierra Club. At a national level, Patagonia is supporting the cause. A full list of supporters is at https://nobigsugar.com/current-signers.

The campaign's roots in Florida are a critical difference from previous sugar reform efforts. In the past, government efforts to hold big sugar accountable failed in part because pro-reform politicians outside Florida never had support within Florida. This time, a bipartisan groundswell in Florida is calling for change.

"The sugar industry does not have the right to demand Florida's environment kneel to their wishes," said Republican US Representative Brian Mast. "As representative of the Treasure Coast and the Palm Beaches, I will not let them make backroom deals that poison our waterways or starve Florida's Everglades."

"I've dedicated my career in public service to fighting polluters who hurt Floridians and our environment," said Democratic Florida Representative Anna V. Eskamani. "Change is possible when more elected officials stand up to one the most powerful industries in the state and say no to their practices of polluting our air and water. This campaign is fighting to protect our environment and our people, and I'm proud to be a part of it."

"In my community, toxic chemical ash from burning cane falls on baby showers, on weddings, on funerals - and on our children's faces every day. That's our tragic reality in 2022, and it's been that way for generations," said Robert Mitchell, a founder of Black Lives Matter Muck City. "'Her soil is her fortune' is our city's tagline. The truth is her soil and her people are her fortune. This campaign is the best shot we have at proving that point."

"This campaign will limit big sugar's money and influence in politics, protect the planet, and make lives better for people," said J.J. Huggins, spokesman for Patagonia.