BEIJING, Jan. 26, 2022 /PRNewswire/ -- iQIYI, an innovative market-leading online entertainment service in China, announced that it has completed the production of two 4K test films this week in its self-built virtual production studio. The productions used scenes from the communities of Buliangjing, the fictional location where the mystery in iQIYI's hit drama Luoyang starts. The test films also mark a major step in iQIYI's realizing its vision of incorporating digital assets in the production of its series, films, animations, games, VR, commercial licensing, and other businesses, which enhances content quality, lowers production cost, and improves efficiency, as the company adopts a diversified monetization strategy and promotes the industrialization of the film and TV industry. 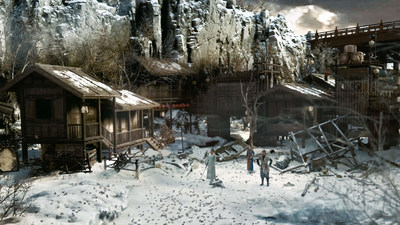 The two films adopt standards for TV drama and film production and completes off-screen expansion and AR foreground overlay with core products developed in-house. The program achieves a technological breakthrough in the industry as it has created an all-encompassing process of digital assets application, an important step to help iQIYI realize its goal of building a "virtual film and TV city". Repeated applications of these digital assets will help greatly reduce the marginal cost of set production. Data shows that the application of digital assets into TV and film industry can save around 30% of the production cost.

ZHU Liang, Vice President of iQIYI and Head of Intelligent Production, points out that "Since the virtual set can be used repeatedly, it hugely reduces the cost related to building physical sets and allows for infinite possibilities, as the set can be used for a variety of productions, such as virtual performance, games, murder mystery games, metaverse and others."

The physical set of Buliangjing was built by the production crew in 65 days in an indoor space of 5,000 square meters. Through digital technologies, iQIYI made a full-scale replica of the communities of Buliangjing into virtual asset and used for films. In the example of Wind Blows from Buliangjing, by filming real actors in a virtual setting, iQIYI tells a complete narrative with real-time visual effects. YAN Daiyao, director of Luoyang, says, "Leveraging the digital assets in Luoyang, we extract the scenery of Buliangjing to display on LED panel, creating a powerful comparison between real and virtual settings while leaving space for actors to perform and create a strong dramatic tension."

LIU Wenfeng, CTO of iQIYI and President of Infrastructure and Intelligent Content Distribution Business Group (IIG) once shared, the digital assets may connect more content going forward, enabling users to deeply interact with an IP in a world beyond our physical reality. As part of the plan, on Jan. 21, iQIYI announced the launch of its first set of digital collectibles based on iQIYI's popular original drama series Luoyang, making it the first period drama-based digital collectables issued in China. Featuring in total 6,000 copies of six antique-inspired items from Luoyang as well as 500 copies of a key location in which the show is set in, the set sold out in just seven hours after its release.