With a Successful Early Stage, Atlantis Gears Up for IDO

HO CHI MINH CITY, Vietnam, Nov. 29, 2021 /PRNewswire/ -- This week, the Atlantis team has announced a successful conclusion to their Seed Sales and Private Sales for their fantasy-based massive multiplayer gaming project, the Atlantis Metaverse. The initial funding phase has been ongoing since the beginning of October and has attracted a lot of attention from partners and investors alike, who are interested in seeing the Metaverse trend develop. Through Seed and Private Funding, the Atlantis team is getting the project out there, hoping to expand the scope of our project. 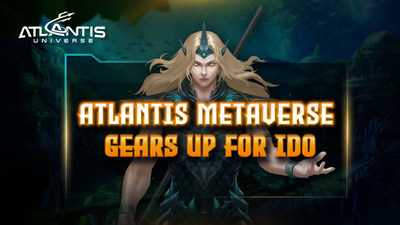 About the Atlantis Metaverse Project

The Atlantis Universe is a universe inspired by the legendary Atlantis civilization. Players will take on the role of demigods. Start your journey to explore, find resources, build squads, raid Bosses, breed demigods, produce weapons, items, equipment, and participate in tournaments in the Atlantis Universe. By taking advantage of the Non-Fungible Token (NFT) feature to create characters and items, as well as Play-2-Earn elements, players will be able to earn a steady income through DeFi integration while still having fun with many gaming features.

There are many types of NFT that players can earn in Atlantis, but the most major type is the character. They are a requirement for you to be able to participate in the game. You need to have at least one character to fight battles and earn equipment. Through completing quests and succeeding in battles, you earn items that can then be used in crafting to create more materials or sold on the Marketplace as NFTs, bolstering the economy.

Atlantis offers a special Breeding feature that allows you to create even more characters by selecting which characters to combine. The new generation (F1) of characters will bear traits from their parents. Pets can also participate in this feature. Players can then offer their characters and pets on the Marketplace to earn income that can be put into purchasing better gear or saving up to buy their own land plots in the future.

The Atlantis Metaverse is not entirely virtual. With a mission to bring technology to real life, Atlantis will tokenize real-life real estate, and all real estate transactions will be done on Smart Contracts, combined with legal procedures abiding by the player's country's laws. All of this is to bring the inhabitants of Atlantis a more sustainable development.

The Atlantis team's first step is to look for investors interested in our vision and concept of a mythical multiplayer world. Through Community Growth and Seed Funding, we look for strategic partners to provide support for the development of the platform.

Through the Seed and Private Sales, Atlantis was able to garner support from many partners, including Hobbit Ventures, Basics Capital, LD Capital, GAINS, EnjinStarter, GameZone, Bluezilla, Aussie Capital, Poolz and 30 other names in the industry.

Getting ready for IDO

The next step for Atlantis right now is launching the TAU token via decentralized liquidity exchanges. Specifically, TAUs will be listed on Enjin Starter on December 7 and BSCPad & Game Zone on December 8. This is known as an IDO (Initial DEX Offering), a crypto asset exchange that depends on liquidity pools where traders can swap the TAU token.

Through the upcoming IDO, the Atlantis team will have an incredible opportunity to develop the game's economy and ecosystem even further, enabling even more feature implementation and new directions for the platform in the future. The path ahead is looking brighter than ever for the Atlantis Metaverse.