#GO!3060 · the "Gen Z to Zero-Carbon" Symposium between China and Turkey successfully held 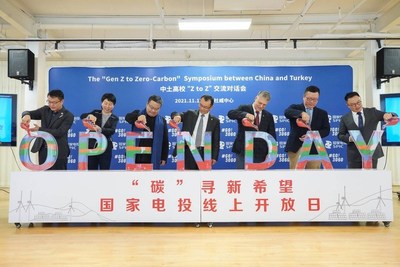 The symposium was held both online and offline, and attended by leaders, experts, scholars and "Gen Z" representatives from the industry, think tanks, and universities from both China and Turkey. Participants had in-depth and friendly exchanges around the theme of zero-carbon and sustainable development, and jointly witnessed the official launch of the Open Day of Turkey Ad?yaman Photovoltaic project of SPIC.

Zu Bin, Board Director of SPIC, presented SPIC's progress and vision in advancing the low-carbon and clean energy transition, in line with the "carbon peak and neutrality" strategic targets. He commented that the ongoing transformation of global energy is both an opportunity and a challenge for the energy and power industry. Generation Z, referring to the young people born between 1995 and 2009, have become the future pillar of this energy transformation, as they are better-informed consumers who advocate and practice a sustainable way of living. This became the rationale for SPIC to launch the "#GO!3060" Symposium that speaks to the young Generation Z population. These activities aim to further explore the themes of "carbon peak and neutrality" targets and sustainability, through the joint efforts of experts, scholars and young leaders, demonstrating SPIC's vision and determination for the future.

Dr. Altay Atl?, a well-known Turkish economist, a lecturer at the Asian Studies program of Bo?aziçi University, Founding Director of Atl? Global, highlighted the time-honored friendship between China and Turkey, which has seen continuous development in recent years with closer bilateral ties and cultural exchanges. These exchanges have had a positive impact on the Chinese people's perspectives of Turkey, contributing to further productive cultural exchanges. Dr. Atl? believes that the young people of Generation Z form an important cultural link between the two countries and in them lies the prospect of China and Turkey's sustainable development. Therefore, it is of great significance to enhance the diverse exchanges between the two countries' Gen Z populations. "It is my hope that the #GO!3060 events serve as another starting point for China and Turkey Gen Z's cultural exchanges, and the two countries' friendship will grow and prosper through the generations to come."

Eric Yuan, Co-President, Head of China, Dewey Center, underlined the Dewey Center's commitment to working with partners and prestigious universities in China and abroad to promote the UN SDGs and the research, development and communications of education, culture and exchanges for global youth. He pointed out that under the global new energy strategy, developing new energies has become a global consensus, providing a key solution to driving economic growth and addressing future energy and environment issues. He marked the importance of cooperation and dialogue as the prerequisite for ensuring humanity's sustainable development, while international cultural exchange and communication propel consensus building. The "#GO!3060" Symposium launched by SPIC and the broader endeavors in youth sustainable development will go a long way in the related fields.

During the symposium, guests from both countries jointly launched the "Online Open Day" of SPIC's Ad?yaman PV Project. The Open Day events told heart-warming stories during the project's construction from the standpoint of the local people, which shed a light on how SPIC is contributing to Turkey's sustainable development and its people's well-being.

In the panel discussion, industry experts, scholars and youth leaders from SPIC, Tsinghua University, Peking University, China Communication University, Beijing Foreign Languages University, Bosphorus University in Turkey and the Internet Research Institute engaged in an in-depth discussion around "Zero-Carbon" Energy Communication from the Perspectives of Generation Z. Mehmet Burak Unal, who is now a student of the International Master's Program in Nuclear Engineering and Management of Tsinghua University (TUNEM), had understandings of SPIC's work in clean energy through the program. With clean energy playing a key role in Turkey's development and with more young students from Turkey coming to China to study, it is expected that they will bring back to Turkey the knowledge they have learned in prestigious universities and the frontier technologies in sustainability from clean energy businesses like SPIC. Mr. Masum Ayd?n, a Turkish graduate of international relations at Peking University, remarked that it is highly important that sustainability be incorporated into a country's development and that Turkey would greatly benefit from the successes of various other countries.

The symposium successfully initiated SPIC's "#GO!3060" global event series, as guests generously shared their thoughts and views on the fields of energy and culture. What follows will be a series of academic and cultural exchanges organized by SPIC to explore the limitless potential of energy transition under the sustainability framework, in line with the principles of "Innovation, Coordination, Green, Open, Sharing".