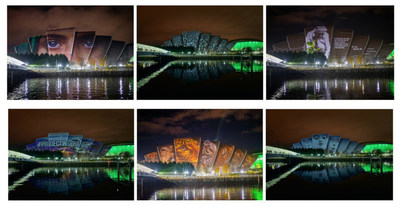 As COP26 nears the end of its two weeks, there have been many words spoken. But if words fail, can art prevail? Projecting Change has brought together unique and never-before-seen works from some of the world's most renowned artists, activists and storytellers including: JR & Darren Aronofsky, Steve McCurry, Olafur Eliasson, Cristina Mittermeier, Joel Sartore, and Jack Harries.

Billie Eilish, Finneas and Naomie Harris have also shared their voices for #ProjectingChange:

"Action is needed now to help leaders understand the scale of the climate crisis before it's too late.  We must all use our voices to demand change ? and be LOUD about it."

"It is on all of us to fight for real change before it's too late.  The time for action is now, there?s just too much at stake."

"What I would like people to know about the climate crisis is no one gets to escape its effects, no matter whether you are rich, poor or indifferent, we are all exposed."

Dr. Jane Goodall said: "We can make this happen. We need more and more of these indomitable spirits, and we need more people to understand it's worth doing. There's still a lot left that's worth fighting for."

Steve McCurry said: "I believe that as long as there are children, there is hope for humanity, because every child has the potential to change the world."

JR & Darren Aronofsky said: "Six years ago, when we presented the Standing March for the Paris COP we were filled with hope and determination that the world would act. The timeline is shorter now and our plea is more pressing. We hope with the rest of the world that enforceable commitments will emerge in the coming days. The world is watching."

Olafur Eliasson, Artist, said: "I conceived the artwork Earth Speakr with kids around the world. It's their voices, their concerns about the climate and their hopes for the future which must be heard by global leaders at COP26." Earth Speakr, an artwork started by Olafur Eliasson, realised in collaboration with Museum for the UN - UN Live.

Joel Sartore said: "We must address biodiversity loss and climate change as one emergency if we are going to save the planet. When we save these species we are actually saving ourselves."

Jack Harries said: "The inspiring work of these brilliant photographers shows the true scope of the climate emergency and through its projection at COP26 brings the issue to a global audience."

Addison Mehr, Executive Producer of Projecting Change and Founder Purpose Media Ventures  said: "My hope is where words fail, art can prevail. While the speeches drone on from inside, these pieces are strikingly silent. A stark reminder of who speaks and who is silenced. Who is on the inside and who is left out. My hope is through art and entertainment we can communicate the stakes but also the opportunity to imagine and create a future worth fighting for."

Travis Threlkel, Creative Director of Projecting Change said: "Projecting Change's extraordinary visuals showcase the beauty of Earth - humanity's one and only home that we must protect for our children and future generations."

Becca Dakini, Producer of Projecting Change said: "We are at a crucial moment in human history, and need world leaders and all of humanity to urgently prioritize solutions and systems change in response to the climate crisis within this decade, for our very survival. Projecting Change is a unique communication & storytelling platform, designed to garner global attention about these existential issues - centering the voices and work of artists, activists, scientists, BIPOC, youth and the more than human world calling collectively for CLIMATE ACTION NOW."

Projecting Change at COP26 is sponsored by The Ford Foundation, FullCycle Climate Partners, and Nia Terro.

Ibrahim AlHusseini, FullCycle Founder and Managing Partner said: "The feeling of awe and wonder is intrinsic to being human. Our current trajectory rushing towards the extinction of a million plants and animals is stripping future generations from experiencing a world filled with monarch butterflies, hummingbirds, snow-capped mountains, and most importantly, the humility that comes with the recognition of one's place within a balanced ecosystem. We must not rob our children of these transcendent moments."

Projecting Change is produced alongside Cyrill Gutsch's Parley for the Oceans.

Cyrill Gutsch founder of Parley for the Oceans said "Cyrill Gutsch, Founder Parley for the Oceans said: "Mankind is at war with the oceans, climate and life. If we win this war, we lose it all. We  will not survive on a dead planet. Now is the time to accept our failures, to let go of harmful and exploitative materials, products and business practices. We can invent our way out of this mess if we collaborate with  nature and unlock the true high tech of the natural world, that was already here long before we arrived."

Additional quotes from some of the participants of Projecting Change:

Cristina Mittermeier, Co-Founder and President of SeaLegacy and Only One, said:

"Each one of us has a responsibility to participate in the health of this planet - actively. What's going to save our climate is for more people to recognize that the ocean isn't just a victim of climate change but our path forward, and we cannot afford to stand still any longer, let alone go backwards."

Jerome Foster II said: "If we truly want a world that is equitable and just for all ? we demand real Climate Action Now."

Alexandria Villaseñor said: "Protecting our right to a livable future, depends on the actions you take today."

Quannah Chasinghorse said: "We need to move away from the use of fossil fuels and move onto clean, sustainable energy."

Sonia Guajajara said: "Our lives are inextricable from the natural world...Our battle is not just for the future. It's for the present."

Chief Raoni Metuktire said: "You have to change the way you live... To live you must respect the world, the trees, the plants, the animals, the rivers, and even the very earth itself."

Grandmother Casey Camp Horinek said: "Protecting rights of nature is recognizing we are nature protecting itself"

For the full list of participants and more information, visit: https://projectingchange.io