BUFFALO, N.Y., Nov. 11, 2021 /PRNewswire/ -- New Era Cap Co. Inc., the international sports and lifestyle brand and the official cap of the NFL, has launched the 2021 NFL Salute to Service collection. A year-round initiative that is highlighted every November on NFL sidelines, Salute to Service will bring football fans' attention this month to the positive impact and sacrifices made by our nation's active-duty service members, veterans and their families. 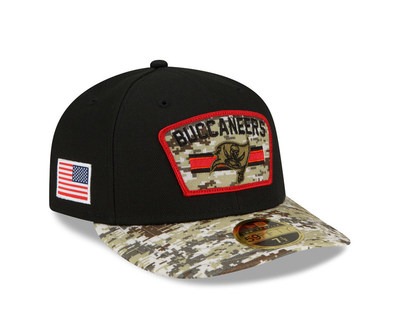 This year, fans can honor the military community by joining their favorite team and players in wearing one of the newest caps in the Salute to Service collection.

"At New Era, we're inspired by the service and sacrifices of our military communities, and we're honored to produce caps to support the NFL's Salute to Service efforts," said Tim Shanahan, Director of Licensed Products at New Era Cap. "This collection of caps honors America's service members and veterans and promotes the work of nonprofits established to serve their needs. We're proud to do our part to help."

The NFL's Salute to Service program strives to Honor, Empower and Connect service members and their families. The NFL does not profit from the sale of Salute to Service products. Charitable contributions are awarded to the league's military nonprofit partners. Since 2011, more than $51 million has been raised to support organizations that support the military community.

Salute to Service caps will be worn by NFL players and coaches on the sidelines throughout the month of November. The collection is available at neweracap.com.

ABOUT NEW ERA CAP: Since 1920, New Era has been hand-crafting the finest headwear in the world. Today, with apparel and accessories lines, the brand is a market leader rooted in sports and an influencer of street and lifestyle culture around the globe. With over 500 licenses in its portfolio, New Era is the brand of choice in the worlds of sport, fashion, music and entertainment. The Company is headquartered in Buffalo, N.Y., and its products are sold in more than 120 countries. For more information on New Era's global offices and partnerships, visit www.neweracap.com and social channels @neweracap.