It's Official: Quark Expeditions is Heading Back to the Antarctic starting November 25!

SEATTLE, Oct. 15, 2021 /CNW/ -- Quark Expeditions, the global Leader in Polar Adventures, has confirmed it will resume polar voyages to Antarctica in November, starting  with the inaugural voyage of its game-changing new vessel Ultramarine. Quark Expeditions is proud to be one of the first polar operators to return to the Antarctic. 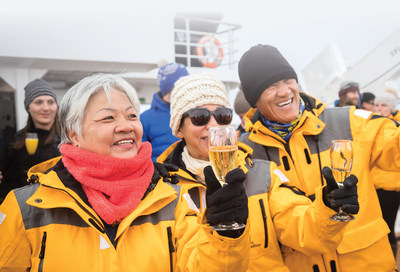 "We're beyond thrilled to make it official: It's all systems go for our Antarctic season to launch on November 25, 2021, now that Argentina is opening up its ports and airports to international travelers on November 1," said Thomas Lennartz, Vice President of Sales at Quark Expeditions. "And we're doubly excited because our highly-anticipated Antarctic 21/22 season will also be the inaugural sailing season of our technologically-advanced ship Ultramarine, whose maiden voyage will the specially-curated Solar Eclipse 2021: Totality in Antarctica, with South Georgia expedtion."

While many itineraries in Quark Expeditions' Antarctic 21/22 season have sold out already, cabins are still available on two one-of-a-kind voyages:

? Essential Patagonia: Chilean Fjords and Torres del Paine: Retrace Charles Darwin's epic voyage to the "edge of the world" on a 15-day journey into Chile's spectacular network of fjords and channels.

"All of the voyages in our Antarctic 21/22 season are designed to fulfill the pent-up desires of travelers who've long dreamed about exploring the Polar Regions," said Lennartz. "Thanks to Ultramarine's two twin-engine helicopters, 20 quick-deploy Zodiacs, superb onboard amenities?including a spa with floor-to-ceiling windows?and the largest portfolio of off-ship adventure activities in the industry, our guests will celebrate their return-to-travel in the most memorable way possible."

About Quark Expeditions: Specializing exclusively in expeditions to Antarctica and the Arctic, Quark Expeditions® has been the leading innovator of polar adventure since the company took the first group of consumer travelers to the North Pole in 1991. Quark Expeditions has been innovating ever since. With a diverse fleet of specially-equipped small expedition vessels and icebreakers?some of them equipped with helicopters?Quark Expeditions delivers deeply immersive polar experiences?and is able to take guests deeper into the Polar Regions than anyone else. Led by passionate and seasoned expedition teams, including scientists, wildlife experts and researchers, Quark Expeditions offers an onboard program that enriches the passenger experience.

About Travelopia: Travelopia is one of the world's leading specialist travel groups. A pioneer in the experiential travel sector with a portfolio consisting of more than 50 independently operated brands, most of which are leaders in their sector. From sailing adventures, safaris and sports tours, to Arctic expeditions, each brand is diverse and focused on creating unforgettable experiences for customers across the world.