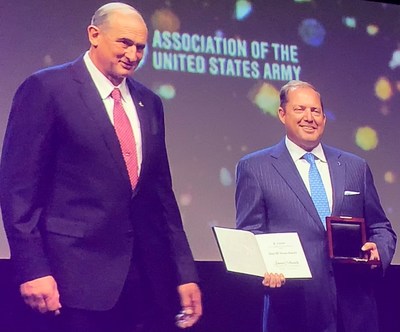 "On behalf of PenFed's employees and volunteers who serve the national defense community, I am honored to receive this prestigious award from the Association of the U.S. Army," said Schenck. "During my seven years as CEO, while PenFed's membership has grown from 1.4 million to 2.4 million, we are so proud of serving our national defense community?the men and women and their families who sacrifice so much to keep us free. This award recognizes PenFed Credit Union's outstanding service to our core membership base, as well as the PenFed Foundation's contributions to active duty military, veterans, families and caregivers."

Schenck also serves as the CEO of the PenFed Foundation, which has raised over $40 million to help military veterans heal their wounds, pay their bills, own their first homes, and start their own businesses.

In addition to his work with PenFed, Schenck volunteers on the board of Armed Services Arts Partnership and supports dozens of other organizations contributing to our national defense.

Among the most recent charitable causes supported by PenFed Credit Union and the PenFed Foundation:

Schenck served in the U.S. Army as an Aviation Officer for 13 years. After graduating from the U.S. Military Academy at West Point, Schenck flew Black Hawk helicopters in Korea and trained other U.S. Army aviators as a night vision goggle instructor pilot.

After being selected by the Army to attend Harvard Business School, Schenck went to back to West Point to teach Economics and Finance at the U.S. Military Academy. He was assigned to the Pentagon to serve on the Army Staff in the Office of the Deputy Chief of Staff for Operations and Plans, and was later selected to serve as a Special Assistant to the Secretary of the Army. Schenck received the Legion of Merit for his contribution to the Army by overseeing creation of the $453 million Army University Access Online educational initiative. He was selected by HillVets as one of the nation's 100 most influential and impactful veterans.

About PenFed Foundation
Founded in 2001, the PenFed Foundation is a national nonprofit organization committed to empowering military service members, veterans and their communities with the skills and resources to realize financial stability and opportunity. It provides service members, veterans, their families and support networks with the skills and resources they need to improve their lives through programs on financial education, homeownership, veteran entrepreneurship and short-term assistance. Affiliated with PenFed Credit Union, the Foundation has the resources to effectively reach military communities across the nation, build strong partnerships, and engage a dedicated corps of volunteers in its mission. The Credit Union funds the Foundation's personnel and most operational costs, demonstrating its strong commitment to the programs the Foundation provides. To learn more, visit www.penfedfoundation.org.