"We're making so much progress toward economic recovery, but now extremists are trying to recall the governor and suppress the vote," award-winning actor, comedian, and author Haddish notes. "This is not a joke ? we've got to vote and vote 'No' on this crazy recall by mail or in person. We've come too far to turn back now."

Multi-Grammy award winner Stevie Wonder's advertisement includes a brief jingle encouraging listeners to "Just Vote No." His universal message is delivered from the humanitarian and intercultural legacy that Wonder has advanced his entire musical career, especially in his adopted home of California. Wonder champions Voting, Civil, Human, Women's, and Disability Rights in the spot.

Nixon and Peete are seasoned veterans of the sports, business, and philanthropic worlds. In addition to their athletic careers and business interests in real estate and sports franchises, Nixon co-leads the Debbie Allen Dance Academy with his wife actress Debbie Allen and Peete is an executive at the HollyRod Foundation, an autism intervention and Parkinson's research organization.

Nixon's advertisement focuses on the historic context of Right-Wing attacks on democracy, including the January 6 insurrection on the U.S. Capitol. Peete's advertisement delivers the clear point that with only a few days to go, California voters have the opportunity to finish this election with a crescendo of no votes.

In addition to working with strong African American voices to oppose the Recall, AAVREP has been working on a multi-platform initiative to educate and encourage Black voters in California to vote "No" on the Recall. AAVREP's efforts have included targeted outreach to Black women voters, a "Souls to the Polls" initiative working with Black faith-based organizations, and a statewide canvassing program to educate, organize and mobilize Black voters to vote "No" on Sept. 14. 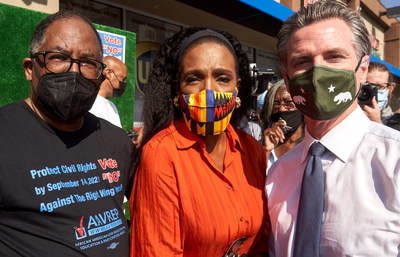