·  This partnership marks Hisense's launch into the Egyptian market

·  Investments to go as high as 170 million dollars

DUBAI, UAE, Aug. 31, 2021 /PRNewswire/ -- Hisense, a leader in manufacturing of consumer electronics and white goods, has signed a Memorandum of Cooperation with Elaraby Group; the largest home appliance enterprise in Egypt; thereby launching - for the first time in Egypt - the Hisense brand; granted with Elaraby Warranty. 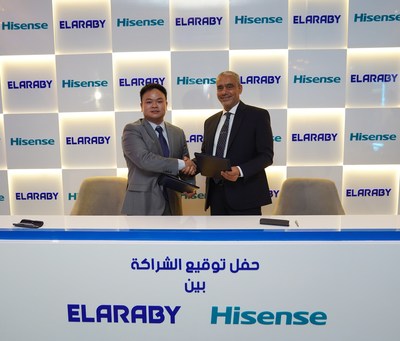 With the partnership, investments in manufacturing televisions, refrigerators, and air conditioners are expected to go as high as 170 million dollars, while providing an average of 4000 job opportunities. The Elaraby Group's impressive distribution network, along with strong marketing and brand management, will provide a solid support base for Hisense to solidify its position in Egypt.

This partnership was announced during the press conference and ceremony held between Hisense and Elaraby Group, at one of Cairo's prominent hotels, on Thursday, the 26th of August.

The event was attended by several key industry dignitaries; namely General Mohamed El-Zallat, Chairman of The Industrial Development Authority (IDA), General Abdul Raouf Al-Ahmady, Chairman of the Industrial Control Authority, Dr. Abdulfattah Afify, Chairman of the Egyptian Organization for Standards and Quality, and Dr. Ibrahim Elsegini, Assistant to the Minister of Economic Affairs. Elaraby Group was represented by Eng. Mohamed Mahmoud Elaraby, CEO, as well as Eng. Ibrahim Elaraby, Vice Chairman of Elaraby Group and Chairman of the Federation of Egyptian Chambers of Commerce, while Hisense International was represented by Mr. Jason Ou, Managing Director of Hisense Middle East and North Africa. The event witnessed the attendance of top tier journalists, and prominent media figures, as well as several representatives of both Egyptian and Chinese corporate entities.

During the ceremony, Mr. Ou said, "It is our pleasure to announce our strategic partnership with Elaraby Group; the biggest manufacturer of home appliances and consumer electronics in Egypt. Our partnership with Elaraby Group; being a prominent world-class organization of home appliances manufacturing, grants us an unmatchable opportunity to manufacture and market our products in Egypt; and is definitely considered a step forward towards expanding our investments in the Middle Eastern and North African regions."

Mr. Ou further added that Hisense sales have been growing recently in the Middle East with a 116% growth rate in the first half of 2021; compared to 2020. Sales growth in TV sets specifically has increased by 94%, while air conditioners sales grew by 120%, and the overall Hisense home appliances sales by 134%.

From Elaraby Group's side, Eng. Mohamed Mahmoud Elaraby revealed his acknowledgement for signing a memorandum of cooperation with such a huge industrial corporation like Hisense, which is known for adopting creative and technological development in its core strategy. He also added that the main beneficiary of this partnership is in fact the customer himself; who will obtain the Hisense quality and modern technology; along with Elaraby warranty, and at suitable prices; since the products are priced to match with the capabilities of different consumer segments. Eng. Elaraby gave a personal promise in his speech that this partnership would pave the way for much mutual cooperation between both countries, which will be in favor of the Egyptian industrial market.

Eng. Ibrahim Elaraby, added to Eng. Mohamed Elaraby's speech; clarifying that Elaraby Group's corporate strategy was focused on satisfying customer needs and taste variations. He also declared that this partnership came after long-term analysis of the Egyptian and local industrial market needs; with specification to Elaraby's client-base who would definitely appreciate the value of owning the Hisense modern technology in their TV sets, refrigerators, and air conditioners.

Eng. Elaraby also revealed there were future plans for introducing massive production lines to cope with the expected high demand on the Hisense product in Egypt in the upcoming phase; thereby providing thousands of job opportunities for Egyptian citizens. He stated that it was part of the overall corporate strategy of Elaraby Group to promote home appliances manufacturing and importation reduction, which complies with the current Egyptian economic strategy lead by President Abdulfattah Elsisi. Eng. Elaraby asserted that Egypt was steadily moving forward towards achieving a huge industrial leap; immensely-developing local industries, and increasing the rate of manufacturing for local Egyptian products.

Egypt being a strategic market in the MENA region, this partnership will be a milestone for both the companies to leverage each other's strengths and expand their business footprints and consolidate their market positions.

With the core values of 'integrity, innovation, customer focus and sustainability' and the development strategy of 'Sound Technological Foundation and Robust Operation', the brand has delivered supreme quality products, excellent after-sales and customer services as well as reassurance of its comprehensive warranties, for over 50 years.

With products exported to over 160 countries and regions, Hisense has sponsored the world's top sporting events such as UEFA EURO 2016, 2018 FIFA World Cup, UEFA EURO 2020 and 2022 FIFA World Cup, and becomes the global sponsor of Paris Saint-Germain football club.

For more information and all the latest updates follow: