DUBLIN, Calif., July 30, 2021 /PRNewswire/ -- TriNet, a leading provider of comprehensive human resources for small and medium-size businesses (SMBs), today announced the addition of Dr. Lawrence H. Summers, American economist and President Emeritus, and the Charles W. Eliot University Professor at Harvard University, to its roster of thought leaders and influencers at the 2nd annual, award-winning, TriNet PeopleForce 2021. The four-day conference will be held in-person from The Times Center in New York City (built by renowned architect Renzo Piano) and virtually from anywhere. The event kicks off on September 13 with an impressive roster of distinguished speakers sharing timely and insightful content vital to business success and the future of work. 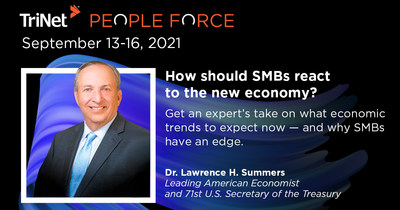 Dr. Summers served as the 71st Secretary of the Treasury under President Bill Clinton, Director of the White House National Economic Council under President Barack Obama, President Emeritus of Harvard University, and chief economist of the World Bank.

"We are thrilled and honored to have Dr. Summers join us at TriNet PeopleForce 2021," said TriNet Senior Vice President, Chief Marketing Officer and Chief Communications Officer Michael Mendenhall. "We have seen an incredibly volatile market this past year, mainly due to the pandemic, and this will be an outstanding opportunity to hear from the 71st Secretary of the Treasury?who is a highly respected and leading American economist?on how to pivot and adjust to the changing business environment. His wealth of knowledge and expertise will be incredibly helpful for SMB leaders as they start ramping up their business for the post-pandemic world, and prepare for the remainder of 2021 and beyond."

Dr. Summers' tenure at the U.S. Treasury coincided with the longest period of sustained economic growth in U.S. history. Impressively, he is the only U.S. Treasury Secretary in the last half century to have left office with the national budget in surplus. As one of President Obama's chief economic advisors, his thinking helped shape the U.S. response to the 2008 financial crisis. He helped craft the U.S. response to international financial crises in Mexico, Brazil, Russia, Japan and emerging markets in Asia.

Dr. Summers served as the President of Harvard University for five years, where he focused on equality of opportunity and removing all financial obligation from students with family incomes below $60,000 a year.

Currently, Dr. Summers is the President Emeritus and the Charles W. Eliot University Professor at Harvard University. He is a contributor to Bloomberg's Wall Street Week and a contributing columnist to The Washington Post. He is an advisor to businesses and investors, and serves on the boards of Square, States Title/Doma and SkillSoft Corporation. He also consults with or advises a range of companies in the finance and technology sector.

Dr. Summers was the first social scientist to receive the National Science Foundation's Alan Waterman Award for scientific achievement and, in 1993, he was awarded the John Bates Clark Medal, given to the most outstanding economist under 40 in the United States. He was elected to the National Academy of Sciences in 2002, and has published several books and more than 150 papers in scholarly journals.

Occurring September 13-16, TriNet PeopleForce is a one-of-a-kind event taking place both virtually and in-person from New York City. The conference brings together a roster of high-profile leaders to help SMBs reimagine, rebuild and move forward as they come out of the COVID-19 pandemic. Attendees will hear from renowned speakers and experts on topics such as SMB agility, calculated risk-taking, the future of work, business resiliency, DEI, healthcare, the state of the economy for SMBs and much more. TriNet PeopleForce also fosters networking opportunities for its participants with business leaders from across the country.

Those wishing to attend the live SMB event in New York City can request a ticket by emailing PeopleForce@TriNet.com. 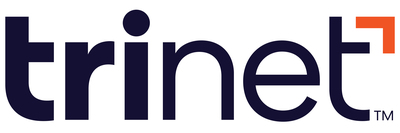