COTULLA, Texas, July 27, 2021 /PRNewswire/ -- Leading animal welfare nonprofit Born Free USA welcomed a new monkey to its primate sanctuary in South Texas last week. The monkey ? a 5-year-old rhesus macaque named Gambit ? was surrendered to Born Free USA by a private owner, who kept Gambit as a pet since he was a baby. 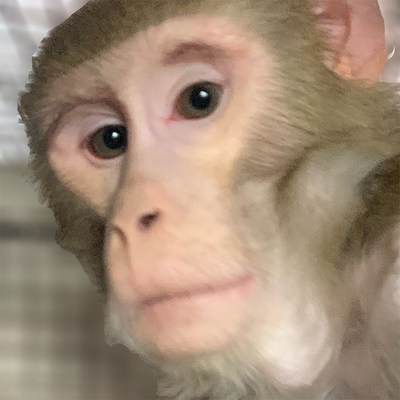 Born Free USA's primate sanctuary is one of the largest in the United States, home to more than 400 monkeys, many of whom were rescued from roadside zoos, retired from animal experimentation or, like Gambit, are former pets.

Now at the sanctuary, Gambit will receive high-quality medical care, nutritious food, room to roam and explore in a natural setting, freedom from unnecessary interactions with humans, and, crucially, the chance to socialize with other monkeys. Says Dr. Liz Tyson, Born Free USA Programs Director and head of the primate sanctuary, "Gambit has lived a sad life. He was purchased as a baby when he was tiny and vulnerable. At that time, his 'owner' had no idea what he was getting himself into. After a change in life circumstances, Gambit was passed to family members. As he grew stronger and more aggressive ? something that is natural when wild animals are kept in unnatural confinement ? he was moved permanently into a parrot cage. It was there that he went on to spend almost four years of his life. When we arrived to pick him up, we met an anxious, stressed, pale, and thin monkey who paced obsessively in his small cage. We are so pleased that his 'owners' reached out to us so Gambit could finally live the life he deserves at our sanctuary. His arrival at the sanctuary marks the first step in his journey to recovery."

Conservative estimates suggest there are approximately 15,000 primates kept as "pets" in U.S. homes. Nonhuman primates (such as chimpanzees, gorillas, lemurs, orangutans, capuchins, and marmosets) are highly intelligent and sensitive wild animals. In nature, most species live in complex, multigenerational, social hierarchies. These needs are fundamentally incompatible with the realities of life in captivity as pets.

In addition to being cruel, keeping nonhuman primates as pets is also dangerous. Monkeys and other nonhuman primates are wild animals who cannot be domesticated and stories of injuries, attacks and escapes by pet primates abound. The primary reason that Gambit's owner reached out to Born Free USA was because he was hyper-aggressive and she had fears that he would one day break out of his cage and attack her.

Nonhuman primates also carry a host of illnesses that could pass to humans, including yellow fever, monkey pox, Ebola and Marburg virus, Herpes simiae (herpes B), simian immunodeficiency virus (SIV, the primate form of HIV), viral hepatitis and measles. News reports in the last week have confirmed that a lab worker in China died from herpes B infection passed to him by a monkey. Herpes B is fatal in up to 80% of untreated cases in human beings.

Says Angela Grimes, Born Free USA CEO, "Gambit's arrival at the sanctuary is part of a larger trend we are seeing of pet primate owners wishing to rehome animals to sanctuaries. Just last month, we welcomed Kiki, a vervet monkey who had been kept as a pet since she was a baby, and we have been contacted by several other people asking us to take in their pet monkeys, too. Some owners contact us because they've been bitten or attacked ? a common occurrence. Others notice the animals seem ill, stressed or otherwise unwell. Still others realize they lack the space and resources to care for the animals. All of this points to one inescapable fact: monkeys and other nonhuman primates are not meant to be kept as pets and forcing them to live alongside humans as pets is harmful to the animals and potentially dangerous for all concerned."

While sanctuaries like Born Free USA's can provide the space and opportunity for some pet monkeys to have a fresh start in a natural setting, sanctuaries are not the solution to the exotic pet problem. Instead, a comprehensive legislative solution is needed to protect nonhuman primates and the public from the cruel and dangerous pet trade. The Captive Primate Safety Act is an important bill that would do just that. Newly reintroduced in the U.S. House of Representatives on May 12, 2021, the Captive Primate Safety Act would prohibit the interstate commerce of primates as pets and ban the private ownership of these species, with exemptions for bona fide sanctuaries, universities, and other facilities. The bill would also restrict contact between the public and primates.

Tyson adds, "We are grateful that Gambit's former 'owner' chose to surrender him to our sanctuary, where he will receive the expert care he requires and deserves, and that so many others are realizing that they cannot provide proper care for these animals. But, there are thousands of monkeys and other nonhuman primates being kept as pets in the U.S. ? the solution to the cruel and dangerous keeping of primates as pets is not sanctuaries, but legislative change to shut down the issue at the source. The Captive Primate Safety Act will see to it that no more monkeys like Gambit suffer in the pet trade in the future. We are working hard to ensure that this important piece of legislation becomes law."

To learn more about Gambit's rescue and to follow his road to recovery at the primate sanctuary, visit www.bornfreeusa.org/findingsanctuary.

About Born Free USA
Born Free USA works to ensure that all wild animals, whether living in captivity or in the wild, are treated with compassion and respect and are able to live their lives according to their needs. We oppose the exploitation of wild animals in captivity and campaign to keep them where they belong?in the wild. Born Free USA's Primate Sanctuary is the largest in the United States and provides a permanent home for approximately 400 primates rehomed from laboratories or rescued from zoos and private ownership. We're social: