GUIYANG,China, July 11, 2021 /PRNewswire/ -- China is home not only to rare giant pandas and Asian elephants but also to a rare species of monkey known as the "only child of the world": the wild Guizhou snub-nosed monkey. The lovely Guizhou snub-nosed monkeys are mainly found in the Guizhou province in Southwestern China. Boasting beautiful landscapes, a pleasant climate, and an exceptional ecological environment, known as the "mountain park province" of China, Guizhou's outstanding achievements in ecological civilization has earned itself a place on the world stage. 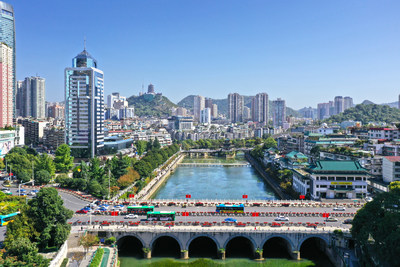 The Eco Forum Global (EFG) Guiyang 2021 will be held in Guiyang, the capital of Guizhou Province, from July 12th to 13th. It is the only international forum in China with the theme of ecological civilization. Since its inception in 2009, the Forum has been successfully held for 10 sessions.

Themed as "Green and Low-carbon Development Fostering A Community Of Life For Man And Nature", politicians and business leaders, experts, and scholars from around the world and China will gather to explore international consultation mechanisms and deepen international exchanges and cooperation on environmental protection.

A platform for open cooperation in China's interior

Earlier this year, many scientists were eagerly awaiting the world's largest single-aperture radio telescope (FAST) to start formal operation in Guizhou, China. Known as "China Eye', FAST will open to the global scientific community and accept observation applications from scientists around the world.

The "China Eye" will provide research and observation possibilities to the global scientific community, aiding the cooperation between scientists from different countries; The "China Eye" signifies China's openness and scientific development, adding a technological edge to the beautiful province of Guizhou.

In a change from its remote and inaccessible past, Guizhou has encouraged massive growth in the green economy and infrastructure development while preserving the region's natural beauty. Guizhou hosts China's first national comprehensive big-data pilot zone. Numerous data-centered ecological and environmental monitoring systems have been implemented one after another, such as environmental quality databases, pollution source databases, and ecological and environmental data centers. Thousands of enterprises have achieved deep integration with big data, and the proportion of the green economy in the region's gross domestic product has increased from 33% in 2016 to 42% in 2021. The province has also invested heavily in dozens of roads, waterway, and railroad projects, with highway coverage approaching 100 percent by 2020. What an astounding achievement.

The concept of "ecology" has gone hand in hand with Guizhou's rapid development. Guizhou is one of the most biodiversity-rich regions in China with one of the largest areas in the world for karst landscapes, where many wild animals and plants reside. According to statistics, 11,442 species of wildlife have been identified in Guizhou. Guizhou snub-nosed monkeys, listed as EN (endangered) by the IUCN, inhabit the Fanjing Mountains of Guizhou. Due to their scarcity, scientists also call them the "only child of the world." Fortunately, the population of Guizhou snub-nosed monkeys has been steadily growing.

The year 2021 is defined by the United Nations as "a critical year for restoring our relationship with nature." Starting from this year, there are only 10 years left to achieve the climate targets of the Paris Agreement and the 17 Sustainable Development Goals (SDG 2030). This year's EFG comes with great significance in promoting sustainable development around the world.