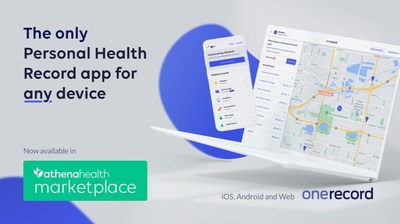 This is a well awaited addition to OneRecord's long list of connected electronic health records systems (EHRs) in both inpatient and ambulatory markets. OneRecord is currently live with Epic, Cerner, Allscripts, Meditech, NextGen, Medhost, CPSI, eCW, Medhost, and the U.S. Department of Veterans Affairs (VA). Every new EHR vendor added to the OneRecord Network plays an integral role in fulfilling the vision for all citizens to be able to access their medical records - right from their fingertips.

OneRecord's CEO and Co-Founder Jennifer Blumenthal remarks that "our team has been building a best in class app that consumers love to use and it shows. It's an honor to be represented on athenahealth® Marketplace and to be the second app in our category, Personal Health Records, chosen alongside Apple's Health App to empower consumers with their medical records from athena providers."

OneRecord is available on the VA.gov App Store, the Apple App Store (supporting iPhones running iOS 12.4+), and Google Play (for devices running Android 9+). Or, access your full health history on OneRecord.com with the latest versions of Chrome, Firefox, Edge, or Safari. 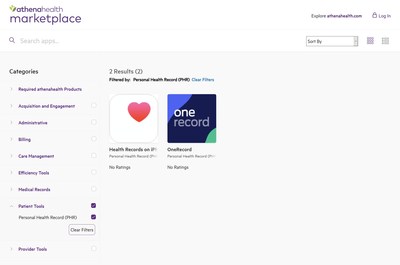