TAMPA BAY, Fla., Feb. 23, 2021 /PRNewswire/ -- This morning, DeliverFund announced some preliminary results from anti-human trafficking operations conducted ahead of and during Super Bowl LV. Over 15 intelligence reports of suspected traffickers were referred to law enforcement for potential human trafficking investigation cases. Additionally, over 100 cases were reviewed by DeliverFund and IAHTI team members and were submitted to the Tampa Bay Fusion Center. DeliverFund has provided support to IAHTI over the past year, partnering on operations in support of human trafficker identification and law enforcement training. 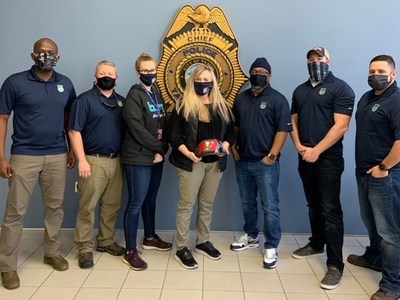 "Every year, while 100 million people enjoy the Super Bowl around the world, countless women and children are sex trafficked in one of the most sickening and brutal crimes in human history," said Jeanne Parker, Director of Special Programs at DeliverFund. "We are grateful to work with our federal, local, and non-profit partners as we work to eradicate human trafficking in the United States. I would like to thank the IAHTI, Tampa Bay Police Department, Hillsborough County Sheriff's Office, Gwinnett County Sheriff's Office, Seminole County Sheriff's Office, and the Montgomery County Department of Police for trusting the unrivaled talents of DeliverFund's analysts as we work to protect human life and crush the criminal enterprises behind human trafficking."

"Human Trafficking Investigations are complex and require a multi-faceted approach," said Jeremy Lewis, President of the nonprofit organization International Association of Human Trafficking Investigators. "IAHTI, which includes active law enforcement and partners, has been supporting large-scale events, along with providing training for the host agency and outreach to the host community for the past five years. IAHTI started out as an organization that provided training, networking, and outreach and has since become a force multiplier for host agencies across the United States. Our team brings decades of investigative and analytical support with the intent to support joint investigative operations by identifying victims of exploitation. It is through partnerships between organizations like IAHTI and DeliverFund that victims will be identified and their traffickers prosecuted."

Tampa Bay ranks third in the United States in human trafficking reports, according to the National Human Trafficking Hotline. DeliverFund has participated in Super Bowl operations over the last 3 years, in addition to ongoing law enforcement operations around the country.

DeliverFund was founded and is operated by a group of uniquely qualified and trained individuals who have decades of experience from careers in the CIA, NSA, Special Operations, and law enforcement. They leverage cutting-edge technology into the ultimate weapon against human trafficking.

The International Association of Human Trafficking Investigators has provided training to anti-human trafficking and exploitation practitioners from 64 countries since their inception in 2009. To learn more about IAHTI, please visit https://iahti.org.

For more information about DeliverFund, please visit https://deliverfund.org/. Analysts are available to speak with the media regarding the operation, however, some law enforcement details will not be available due to ongoing investigations. For media booking, please contact Danielle Prior at info@deliverfund.org.