VANCOUVER, BC, Nov. 17, 2020 /CNW/ - Grizzly bears are an ecologically, culturally, and economically valuable species for  British Columbia and Canada. Due to this importance, many populations are intensively monitored by First Nation and provincial governments to ensure effective and evidence-based management to safeguard a healthy population for the future. 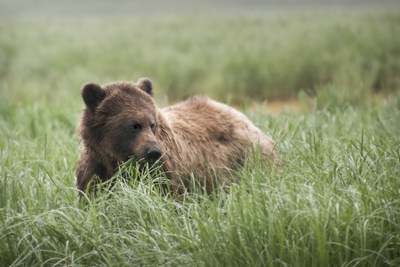 A key component of monitoring programs is the ability to identify individual bears using a set of genetic markers that, when combined, provide a unique 'genetic fingerprint' for each bear. However, the genetic markers that are currently being used are outdated, costly, and do not provide any additional information beyond individual identification.

Genome BC has funded a unique project, led by Professor Chris Darimont and PhD Student Lauren Henson from the University of Victoria, with Chris Genovali from the Raincoast Conservation Foundation, to develop a new set of genetic markers - known as single nucleotide polymorphisms (SNPs) - for the monitoring of grizzly bears on the central coast of British Columbia. The ongoing noninvasive monitoring of grizzly bears in this region, through the collection of hair samples, has been co-led by the the Haí?zaqv, Wuikinuxv, Nuxalk, Gitga'at and Kitasoo/Xai'xais Nations and a better genetic marker set will facilitate the continuation of this noninvasive monitoring in these areas and elsewhere.

"By developing this SNP marker set, we hope to ensure that the long-term monitoring of grizzly bears by our team can continue into the future in a cost-effective way," said Professor Darimont, a member of the Department of Geography and a Raincoast Research Chair in Applied Conservation Science. "We think that the transition of our large data set of known individual grizzlies to this better genetic marker system can serve as proof of concept for the many other researchers monitoring bears in BC and Canada."

The team will move the existing archived inventory of 367 'fingerprinted' grizzly bear individuals from the central coast of British Columbia to this new platform to demonstrate the practical steps and cost-effectiveness of the transition, and add new marker sets to this new system. Future work building upon this tool could also reveal more detailed information about these bears, such as family lineage and environmental adaptation, and the methodology could be applied to other species.

"This genomic tool will allow grizzly bears to continue to be monitored and managed in BC with more information on their ability to adapt to changing ecological, environmental, and anthropogenic pressures," said Dr. Federica Di Palma, Chief Scientific Officer and VP Sectors at Genome BC. "Genome BC will continue to invest in the development of pioneering tools to help protect BC's wildlife population."

This work was funded through Genome BC's GeneSolve program which seeks to foster applied and translational research by connecting the producers of genomics driven technologies with its end-users or consumers in BC's Health, Agrifood and Natural Resources sectors.

Genome BC is a not-for-profit organization supporting world-class genomics research and innovation to grow globally competitive life sciences sectors and deliver sustainable benefits for British Columbia, Canada and beyond. The organization's initiatives are improving the lives of British Columbians by advancing health care in addition to addressing environmental and natural resource challenges. In addition to scientific programming, Genome BC works to integrate genomics into society by supporting responsible research and innovation and foster an understanding and appreciation of the life sciences among educators, students and the public. genomebc.ca