LAS VEGAS, Oct. 14, 2020 /PRNewswire/ -- Congressional candidate Dan Rodimer has put out a new advertisement on local television and online that is refuting falsehoods portrayed in the ad from his Democrat opponent, Rep. Susie Lee (D-NV). The ad features Rodimer's wife, Sarah, who claims that Lee's negative ads are a misrepresentation of his family.

"I'm disgusted that Susie Lee is exploiting my family. I knew that politics was dirty, but I never thought she'd stoop this low," says Sarah in the commercial.

Sarah Rodimer accuses Lee of victimizing her family to score political points and points out that Rodimer has received the endorsement of the "largest coalition of Nevada law enforcement has endorsed my husband in this race."

The ad was accompanied online with a message posted on Rodimer's website from Sarah describing in more detail how the attacks on Dan Rodimer were false.

"When Dan decided to run for political office, it was a decision we made together, as a family. We have five children, with a sixth on the way. Together, we certainly knew that politics can and would get ugly. But, nothing could prepare our family for the outright lies and disgusting attacks that have been launched against us by Susie Lee," said Sarah Rodimer, going into more detail.

"My husband was arrested one time in his life, years ago while he was in college on a Halloween night, after shoving another adult male who had been bullying one of Dan's friends. That's it. One arrest. And the charges from that one arrest were dismissed. In fact, to this very day, Dan Rodimer has no criminal record."

Sarah says that Rep. Lee is using her Congressional campaign to attack her husband and her family. She goes into detail about audio shown in the commercial aired by Lee.

"As for Susie Lee using 911 calls, the government documents Susie refers to in her smears clearly state nothing more than a verbal argument occurred and no crime was committed. Yet she continues to smear us with lies, knowing full well they aren't true. Susie Lee thinks it's okay to spend millions of dollars exploiting my family for her political gain. It's shameful and it disgusts me."

"In fact, the largest coalition of Nevada law enforcement have endorsed my husband in this race. It's the largest in the state. Not only that, they stripped Susie of this endorsement and gave it to Dan...something they wouldn't do if they believed he was at all dangerous or had any kind of criminal record."

"Susie Lee has done nothing for the people she represents. She has failed the people of Nevada in CD3. Instead, she's used her taxpayer-funded position to enrich herself and her family while in office."

The ad has received hundreds of thousands of views since launching and responses have been overwhelmingly positive.

"Big Dan" Rodimer is a former WWE professional wrestler, law school graduate, and a current small businessman in Las Vegas, as well as a husband, and a father of six. Rodimer has been named as a nationwide top tier "Young Gun" candidate by the National Republican Congressional Committee. 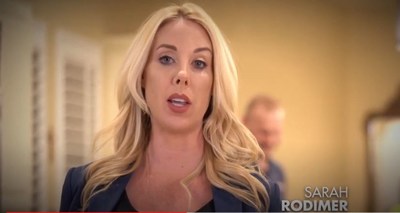