"Great protest songs can't get old, stale or non-relevant because the struggle still continues," he said.  "That's why THEY DON'T REALLY CARE ABOUT US is the anthem during this chaotic, pandemic world we are living in."  (See full statement below.)

"They Don't Care About Us (2020)" incorporates scenes from the original two short films for the "HIStory: Past, Present and Future, Book I" single (one filmed in Brazil and one set in prison examining police brutality) with footage from protests which took place all over the world including cities such as Osaka, Helsinki, Paris, Madrid, Atlanta, NYC, Tel Aviv, Rafah, Brooklyn, Tunis, London, Rio de Janeiro, Cape Town, Toronto, Kenosha, Melbourne, Chicago and many more.

"They Don't Care About Us" was written and composed and produced by Michael Jackson who said of the track, "The song in fact is about the pain of prejudice and hate and is a way to draw attention to social and political problems."  One reporter wrote "(the song) is a brilliant, politically potent, street inspired rap-pop hybrid.  It became a song that not only resonated for the disenfranchised in America but also for those around the world." 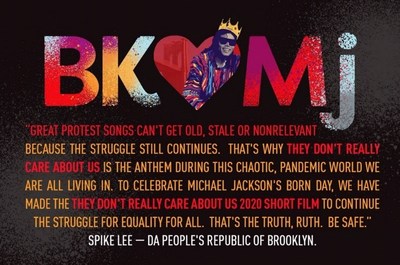