DALLAS, July 29, 2020 /PRNewswire/ -- The North Texas Alliance to Reduce Unintended Pregnancy in Teens (Ntarupt) has been awarded funding from two federal grants totaling $1,050,000 per year from the Office of Population Affairs (OPA) at the U.S. Department of Health and Human Services. The grants will help Ntarupt work with communities to address teen reproductive health, teen pregnancy, support parents, and expand resources for Dallas communities and populations experiencing the greatest need and inequities. 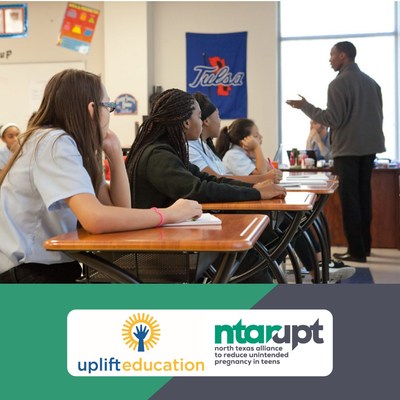 "Ntarupt, along with our partners, has led the way in addressing teen pregnancy in North Texas and providing sex education to thousands of teens and parents," says Terry Goltz Greenberg, CEO. "Through grant awards like these, we can better equip teens and their parents with the comprehensive sexual and reproductive health information and resources needed to make informed life decisions. Never has this been more critical than in today's social, political, and economic environment."

OPA Tier 1 Grant Award
Ntarupt has been awarded $850,000 per year, for a three-year OPA Tier 1 cooperative grant starting July 2020. OPA awarded a total of $56,300,000 to 49 organizations nationwide, and 4 in Texas, to activate initiatives and programs that improve the optimal health of adolescents and reduce teen pregnancy and sexually transmitted infections (STIs) through community and youth education and access to resources.

For this grant, Ntarupt will partner with Uplift Education, the largest, free public charter school network in North Texas, to implement an inclusive, evidence-based, human sexuality education program for scholars across the Uplift Education network.

UPLIFT's goal is to "completely CLOSE the achievement gap between scholars, regardless of their ethnic or socio-economic background, while ensuring that 100% of ... scholars graduate and enroll in college." UPLIFT is very direct about its culture and aspires to achieve "Intentional equity in all systems and processes." Of UPLIFT's almost 20,000 students currently enrolled, 82% are low-income; 97% are ethnic minorities; 53% are considered at-risk of dropping out of school for one or more academic, social, or economic reasons; and 32% are English-language learners?groups significantly underrepresented in postsecondary education.

"We are thrilled to have the opportunity to work with Ntarupt to make sure our youth receive the information and skills that will enable them to prevent pregnancy and related risks, in order to successfully navigate from adolescence into adulthood," Yasmin Bhatia, CEO of Uplift said.

OPA Tier 2 Grant Award
Ntarupt is excited to partner with the University of Texas at Austin Steve Hicks School of social work, one of 13 organizations selected nationally by the Office of Population Affairs (OPA) through the U.S. Department of Health & Human Services awarded, to pioneer the new Texas Foster Youth Health Initiative to promote optimal health for child welfare involved youth. Current systemic policies and practices limit access to vital sexual health information and skill development. As a result, females in Texas foster care are five times more likely to get pregnant than their same-age peers according to a Texans Care for Children Report released in 2018. Ntarupt will receive approximately $200,000 per year to fund coordination and facilitation of innovative interventions for foster, adoptive and birth parents, and foster youth and youth exposed to violence.

North Texas Alliance to Reduce Unintended Pregnancy in Teens (Ntarupt) (www.ntarupt.org) is the sole organization in North Texas committed to bringing together community resources for both parents and teens with a focus on teen pregnancy prevention and sexual and reproductive health, which it has been doing since its inception in 2014.  "Talk About It Dallas" (www.TalkAboutItDallas.com) is an online resource from Ntarupt with funding provided by The City of Dallas, The United Way Ground Floor, and various private and public donations. Follow and engage with Ntarupt on Instagram, Twitter, Facebook, and YouTube, and Talk About It Dallas on Facebook and Instagram.