INDIANAPOLIS, July 5, 2020 /PRNewswire/ -- As he had at the 2020 NTT INDYCAR SERIES season opener in Texas in June, Scott Dixon dominated the second half of today's GMR Grand Prix to lead a 1-2 finish for Honda on the road course of the famed Indianapolis Motor Speedway. 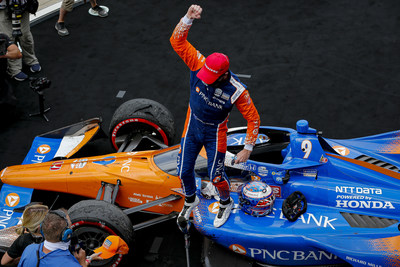 Dixon credited a minor setup change made during his second pit stop for improving the handling of his Chip Ganassi Racing Honda, and the five-time series champion the pulled away during the second half of the 80-lap contest to a nearly 20-second margin of victory over fellow Honda driver Graham Rahal.

For his part, Rahal was able to make a two-stop strategy work to his advantage, with the Rahal Letterman Lanigan Racing driver running especially strong during the middle third of the race, where he led 18 laps and was in contention for the victory. But when the sole caution flag of the race came out on Lap 36, the advantage of Rahal's two-stop strategy was negated. In the closing laps, Rahal fought off a strong challenge from defending race winner Simon Pagenaud to secure the second step on the podium.

Behind the lead pair, Colton Herta led the way for Andretti Autosport with a solid fourth-place finish, while Dixon's teammate Marcus Ericsson brought his Honda home in sixth. Santino Ferruci, in ninth, and Takuma Sato rounded out the top 10 for Honda.

With two wins in two races this season, Honda also continues to lead the IndyCar Manufacturers' Championship, with an unofficial total of 182 points to 142 points for Chevrolet.

Quotes
Scott Dixon (Chip Ganassi Racing Honda) Started seventh, finished first; second consecutive INDYCAR win to open the 2020 season and 48th career victory: "You don't know how it's ever going to go. Graham Rahal was super fast, especially on the [Firestone primary] 'black' tires. We got a little bit of luck [with the caution] that put us in the right direction. The Honda power was fantastic, and we made a change on the car [during the second pit stop] and then the PNC car was so much easier to drive that we could just 'check out'."

Graham Rahal (Rahal Letterman Lanigan Honda) Started fourth, finished second: "I thought the [two-stop] strategy was working perfect. Coming out of the pits after the first stop and still being right with [Will] Power and [Jack] Harvey and all the good guys, all I kept thinking was when the pits cycled through for the last time, we'd have about a 25- or 30-second lead, but obviously the yellow [caution flag] came out and nullified our strategy. But 'Dixie' had tremendous pace during the late part of the race. But the Fifth Third Bank car was great today. I thought our guys did a tremendous job. For our team, after [disappointment in] Texas, this feels extremely good for us."

Ted Klaus (President, Honda Performance Development) on today's Honda win in the GMR Grand Prix: "It's fantastic for Honda to break through and win on the Indianapolis Motor Speedway road course. Every victory at this famous speedway is special. Scott Dixon and Chip Ganassi Racing got it done once again, and we had three HPD teams in the top four with Graham Rahal for Rahal Letterman Lanigan Racing and Colton Herta with Andretti Autosport. Congrats to everyone at HPD and our partner teams who helped make this great day happen. Everyone earned it today!"