POTOMAC, Md., July 3, 2020 /PRNewswire/ -- Myisha M. Gatson, the founder of Pearl Long Term Care Solutions, Inc., a company that recently recognized "Juneteenth" as a corporate holiday as a display of their values of education and racial equity, today released the following comments: 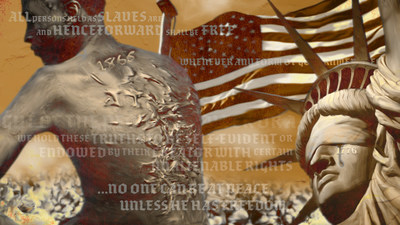 On July 4th, 1776, the world's most powerful nation was born. Yet, 34 of the 47 men who signed the Declaration of Independence, a document that declared their independence from the tyranny of the King of England, owned slaves. Thomas Jefferson, the principal author of the Declaration of Independence, penned the document while owning slaves and even wrote a portion condemning enslavement that was eventually rejected.

From America's inception, Black lives have been the bargaining chip for freedom for all Americans except those with Black skin. The American practice of subjecting Blacks to chattel slavery solely on the basis of their skin color was the country's original sin. With their eyes wide open and in full view of the world, the Founding fathers stated the most egregious hypocritical mistruth as the launch of modern democracy: "We hold these truths to be self-evident, that all men are created equal..."

Our country, and democracies worldwide, are still haunted by those words of hypocrisy more than 200 years later.

I want to believe that the signers believed it. I want to believe that they earnestly thought they were liberating themselves while sacrificing Black freedom as the price and that was the only way. That sacrifice, however, is the wound that has been laid bare for all the world to witness today as two Americas and two Independence Days have become self-evident and the day of reckoning for America is now here.

From 1776 through the Civil War America grew meteorically, becoming the toast of the world. Dumbfounding observers with what was erroneously attributed to industry, innovation and commerce, the nation hungrily consumed the boundless labor of enslaved Blacks. Nearly 85 years passed and the enslavers' down payment was due. The wages of sin, the Civil War, arrived at Ft. Sumter in 1861. This debt had been predicted by one of the great heroes of the Revolutionary War, Marquis de Lafayette, who said, "I would never have drawn my sword in the cause of America, if I could have conceived that thereby I was founding a land of slavery."  The Union fractured and for four bloody years, brothers fought. Fractured or whole, slavery died on America's Second Independence Day, but inequality still lives on today as a powerful reminder of our nation's first sin.

When Abraham Lincoln acted boldly to sign the Emancipation Proclamation, his goal was simple: preserve the Union. Though he signed the Emancipation Proclamation on January 1st, 1863, the last enslaved Africans didn't receive word of it until June 19th, 1865. "Juneteeth" stands as the day the last enslaved Africans became freedmen, though they were not yet citizens. 4,641 weeks after America declared her independence from an oppressive monarch, Black Americans finally had their freedom. Yet freedom wasn't free for America's Black citizens.

That 88 year, 11 month and 15 day gap created two Americas. One, with freedom and opportunity at its core, created wealth that exists well into the 21st century. The other, held back for nearly a century, still struggles to this day to survive and prosper.  The gap between White and Black in every statistic used to measure wealth, health and success today can be traced back to these two independence days. The gap hasn't closed, because America, despite its Civil War, chose to continue to treat it's Black citizens as second-class. The beneficiaries of the first independence day celebrate the nation. The beneficiaries of the second protest. Separated by 32,521 days, two Americas persist, its two independence days a marker of the chasm between Black and White.

Juneteenth 2020 is the turning and tipping point, where America can embrace true freedom which begins with the breaking of the chains, not with the extension of its links and begin to extend that freedom fully to its Black citizens.

Today we can clearly see that these gaps exist and even trace the roots of why. It is important to note that the creation of the gap between the promise and reality of America for Black Americans isn't the fault of anyone alive today. Yet, the promulgation of that gap continues today and has been laid bare for the world to witness as the crushing toll of inequality and racism threatens our democracy. Today, the responsibility falls on us all to do our part to make the promise of America align with the reality of America for ALL of its citizens.

Creating the gap took generations, it will take generations to close. With the spirit of our ancestors, Black and White, the ones who died for all to be free, the ones who chose to grasp at freedom with both hands and not look back, the ones who said enough is enough, we can close the gap. We may have started apart, but we can work together. The litmus test is to stand on the side of truth and justice and silence and inaction are off the table as we all must play a part in making this, our United States, a more perfect union. E Pluribus Unum.

About Pearl LTC:
Pearl LTC Solutions is the booking engine for long-term care, officially scheduled to launch in 2020. Pearl's mission is to make long-term care accessible and affordable for all.