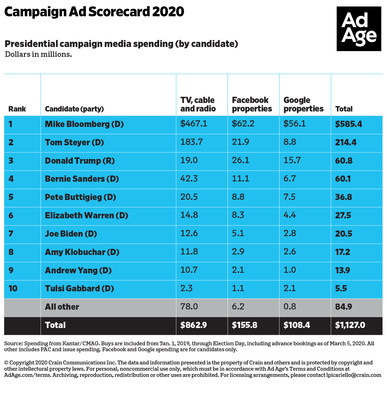 Using world-class data from Kantar/CMAG, the 2020 Campaign Trail provides critical industry context, systemically examining how, when and why the various candidates and campaigns are deploying their funds for advertising and messaging?and the impact it has across industries.

This marks a return to the presidential campaign trail for Ad Age. The publication's 2016 Campaign Trail coverage broke readership records, driving millions of page views and winning industry accolades including a Jesse H. Neal Award for excellence in business reporting.

About Ad Age
Ad Age is a daily must-read for an influential audience of decision makers and disruptors across the advertising, marketing and media landscape.

Created in 1930 to cover a burgeoning industry with objectivity, accuracy and fairness, Ad Age is built on a bedrock on journalistic integrity. Today, Ad Age is a global media brand focused on curated creativity, data and analysis, people and culture, and innovation and forecasting. Ad Age is Important to Important People.