LA JOLLA, Calif., Jan. 17, 2020 /PRNewswire/ -- Alan Alda, the Emmy Award-winning actor, director and writer who has become a leading advocate for effective science communication, has partnered with the renowned scientific institute Scripps Research to bring immersive communication training to scientists and medical professionals on the West Coast. With sessions to be held on Scripps Research's picturesque campus in La Jolla, California, Alda Communication Training (ACT) will deliver its unique storytelling approach to leaders in biotechnology, research and medicine. 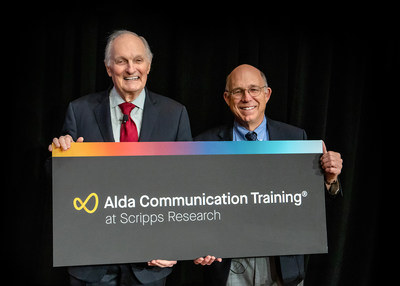 "Alda Communication Training is thrilled to work with Scripps Research to empower scientists with clear and vivid communication," says Alda, who announced the partnership with Peter Schultz, PhD, president and CEO of Scripps Research. "Researchers and industry leaders up and down the West Coast are doing such important work to advance science and medicine, but often they struggle to reach audiences who don't share their knowledge and experience. This partnership will help these brilliant minds make important new connections and spread the wonder of science with the rest of us."

Alda Communication Training works in tandem with the Alan Alda Center for Communicating Science at Stony Brook University, a nonprofit organization Alda helped found in 2009 to teach scientists the "Alda Method®," a form of communication training that combines improvisational theater techniques and message-design strategies Alda cultivated over his decades-long acting career. Operating out of its New York headquarters, the program has trained 15,000 scientific leaders. In large part because of this work, Alda in 2016 won the National Academy of Sciences' highest honor, the Public Welfare Medal.

"By giving scientists the tools to better relate with the public and tell compelling stories, Alan Alda is amplifying the impact of the work we do as scientists," says Schultz, a pioneer in the field of chemical biology and drug discovery research. "Scripps Research shares Alan's passion for communicating science and we're pleased to be partnering with him as he brings his transformative training program to the West Coast."

More than 30 of Scripps Research's scientists recently participated in Alda's training program, an immersive and engaging experience that helps participants learn to empathize with an audience and present their work in a way that connects with different stakeholders. The skills and strategies can help participants relate to prospective investors and philanthropists, government officials, members of the media, peers across scientific disciplines and the general public.

"The overarching goal of our program is to teach scientists how to engage in productive, memorable conversations about the work that drives them," says Laura Lindenfeld, PhD, executive director of the Alan Alda Center for Communicating Science and interim dean of the Stony Brook University School of Journalism. "But as we all know, that's easier said than done; for many scientists, their immeasurable knowledge actually stands in the way of the relatable human stories that call people to action. We help them overcome this barrier."

The first two-day training session at Scripps Research will be held in June?open to biotechnology industry executives, research scientists and others who play a role in the vibrant life sciences markets of the West Coast, including San Diego, Los Angeles, San Francisco and Seattle. Additional sessions will be held in October and December. Registration is available at aldacommunicationtraining.com/workshops.

Alan Alda, who continues to be widely known for his Emmy-winning role of Hawkeye Pierce on the classic television series M*A*S*H, holds international recognition as an actor, writer and director. But his role as a science communicator is equally distinguished. Before launching Alda Communication Training and the Alan Alda Center for Communicating Science, he hosted the award-winning series "Scientific American Frontiers" on PBS for 11 years, interviewing leading scientists from around the world. He also hosted the PBS mini-series "The Human Spark" and "Brains on Trial." Alda is author of the science communication book "If I Understood You, Would I Have This Look on My Face?," and host of the popular podcast "Clear+Vivid," which features cultural luminaries who have a powerful ability to communicate.

In announcing Alda Communication Training's new partnership with Scripps Research, Alda took the stage on Thursday evening at the Scripps Research Auditorium in La Jolla?along with Schultz and Lindenfeld?to share stories about how powerful communication has changed the course of scientific careers and shifted public perceptions. At its core, good communication is about relating, he says.

"When you allow yourself to fully relate with another person, you're listening and engaged, riding the waves of uncertainty inherent in any conversation," Alda says. "When you embrace that uncertainty, rather than try to control it, that's when you hit gold. That's when you have the opportunity to make a meaningful connection."

About Scripps Research
Scripps Research, with campuses in La Jolla, California, and Jupiter, Florida, is ranked the most influential institution in the world for its impact on innovation. A nonprofit organization, Scripps Research expands basic knowledge in the biosciences and uses these fundamental advancements to develop profound innovations that improve human health. Scripps Research's scientists lead breakthrough studies that address the world's most pressing medical concerns, accelerating the creation and delivery of medical breakthroughs to enhance health around the globe. Our educational and training programs mold talented and committed students and postdocs into the next generation of leading scientists. Learn more at www.scripps.edu.

About the Alda Communication Training Company
Alda Communication Training (ACT) furthers the good work in communication training pioneered by Alan Alda and the Alan Alda Center for Communicating Science at Stony Brook University in New York. ACT is a mission-driven company offering specialized communication training programs to professionals in STEM and medical disciplines, ACT presents training in collaboration with the Alda Center?empowering scientists, medical professionals, and other researchers to share their work clearly and vividly with a wide variety of audiences. Through in-person workshops and online learning opportunities, researchers learn to communicate their knowledge, discoveries, and professional passion in ways that resonate with other researchers, policymakers, members of the media, students and many others. Learn more at www.aldacommunicationtraining.com.