TORRINGTON, Conn., Dec. 4, 2019 /PRNewswire/ -- EbLens Streetwear & Sneakers, a leading fashion retailer know for iconic and hard-to-find brands and styles, is celebrating its 70th anniversary through a colorful collaboration with FILA, a sportswear company also recognized for its longevity and style. The two companies have teamed up to create the FILA x EbLens Ray Tracer, a multi-color sneaker that celebrates the many colorways of EbLens' long heritage and history. 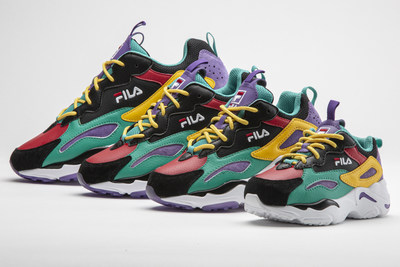 "We are excited to release this great collaboration with FILA," says Vincent Mariani, CEO for EbLens. "This sneaker represents a close partnership between two companies that understand and appreciate the dedication and fortitude it takes to drive success in business for decades. The FILA x EbLens Ray Tracer represents the hard work by representatives of both companies, especially Mark Huchison of FILA, who was instrumental in helping get this project off the ground. This exclusive sneaker seamlessly integrates into our WE WERE THERE campaign marking 70 years of industry-leading customer service."

The FILA x EbLens Ray Tracer adds EbLens' branded colorways from the last 70 years onto the recognized silhouette. Other details that combine FILA's aesthetic with EbLens' heritage include custom sock liners with "We Were There. EbLens Est. 1949" and a label inside the tongue marked "EbLens 1949."

"The design of this anniversary sneaker featured input from every department within the EbLens company family, and designers at FILA," said Paul Eusebio, Chief Merchandising Officer for EbLens. "It was a very involved process as we worked hard to find ways to honor EbLens' long heritage and include details that show off our past, present and future. Every department contributed to the styling of this shoe, and I want to especially thank EbLens Buyers Kevin Hong and Keith Bae for taking such an impactful role in the collaboration process. We are proud to offer this limited-edition sneaker in infant, kids' and men's sizes exclusively in EbLens stores and eblens.com."

EbLens first opened in February, 1949 as a "Working Men's Store" and has evolved over the past 70 years to offer Army/Navy surplus, clothes for the whole family and now as a leading retailer for streetwear and sneakers. The FILA x EbLens Ray Tracer honors EbLens' history of fashion-forward offerings and strong relationships with the brands our customers love.