PRINCETON, N.J., Nov. 21, 2019 /PRNewswire/ -- The health of a community is made up of several factors including access to health services, housing, food access, education, income and unemployment. Now, a new study and database from the New Jersey Hospital Association examines those many factors to identify New Jersey's most vulnerable communities from a health standpoint. 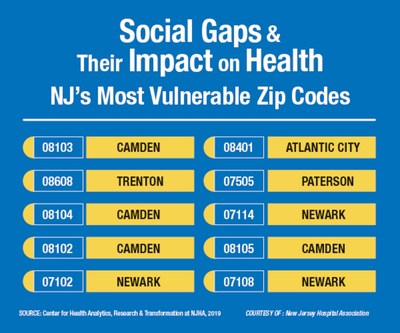 The zip code analysis reveals New Jersey's most vulnerable zip code as 08103 in Camden, followed by 08608 in Trenton and 08104 in Camden. Zip codes in Newark, Atlantic City and Paterson round out the top 10. The entire ranking of 537 zip codes can be found in the N.J. Vulnerable Communities database, developed by the Center for Health Analytics, Research and Transformation at NJHA.

"While the 10 most vulnerable zip codes are centered in New Jersey's largest cities, communities large and small, urban or rural, are shown to be more vulnerable to poor health even when a single social determinant is stressed," states the study, New Jersey's Most Vulnerable Communities: A Zip Code Analysis of Social Gaps and Their Impact on Health.

The study analyzes 20 factors including health measures such as chronic conditions, lack of prenatal care and premature death, along with social measures such as high school graduation rates, employment status and food access. The CHART team developed a scorecard to aggregate the findings and then indexed the results across New Jersey's 537 zip codes.

"This type of data analysis helps us begin to understand the unique challenges that threaten health and well-being in our neighborhoods. Poor health can be an indicator of a fundamental need in our communities, whether it's education, jobs or housing stability," said NJHA President and CEO Cathy Bennett. "It's important that we understand those unique challenges so we can begin to target solutions that will lead to a healthier New Jersey."

The NJ Vulnerable Communities database allows users to select a zip code and see its relative performance on each of the 20 measures compared with the state minimum and maximum. The study found common trends among the state's most vulnerable zip codes, including a median household income below $39,000; an unemployment rate of 14 percent of higher; and a greater prevalence of mental health or substance use disorders.

CHART's analysis revealed some unexpected findings, including adjacent zip codes that have very different results in local health status. One example is Jersey City, where zip code 07306 lands among the state's most vulnerable with a rank of 451 out of 537. Meanwhile, another Jersey City zip code, 07310, ranks 91st, among the top 20 percent in the state. A deeper dive into the two neighborhoods shows that 07310 has a median income three times higher than 07306, along with a much lower percent of residents without jobs, health insurance or a high school diploma.

"The tale of two zip codes in Jersey City is an example of how, within one city's boundaries, there can be a very different impact on health status based on societal factors," said Sean Hopkins, senior vice president of CHART. "Those social determinants of health are the building blocks to improved health status."

Following are the top 10 most vulnerable zip codes:

Go to www.njha.com/CHART to access the full study and the N.J. Vulnerable Communities database.