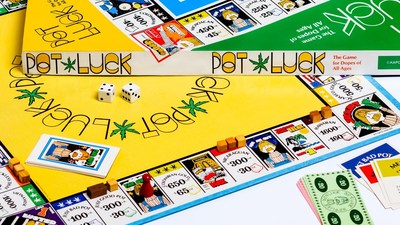 Kapcar seeks a minimum funding goal of $10,000 with various rewards offered to backers at tiered pledge levels. The Kickstarter campaign will reintroduce this popular retro favorite back into the market, which is now primed for cannabis themed games.

"Pot Luck was a game created before its time," said co-creator, Robbie Kaplan, "as society just wasn't ready to accept pot as mainstream in 1980. Today, with the widespread legalization of marijuana, and renewed interest in retro games, we felt it was time to bring this favorite back."

*Playboy Magazine wrote in their June 1980 article, "Going to Pot Luck" - "Somebody had to do it; create a game similar to Monopoly in which the players wheel and deal with quantities of marijuana rather than real estate."

Potluck offers various rewards to its backers, US shipping included:

The game begins with each player on the Straight Spot space. Each time a player passes the Straight Spot, players receive an additional $500 in play money. Players are encouraged to grow their assets by purchasing marijuana title cards in pot varieties like Colombian, Jamaican, Hawaiian, etc., and charging "toking fees" for other players who land on owned pot spaces. Landing on "dealing squares" allows players to buy, sell, broker or trade with any other player or players.

There are multiple opportunities to make and lose money, with hilarious landing spaces like "Getting the Munchies," Running into the Law" or simply "Flying Too High." Players may also earn extra play money by drawing a "Far Out" card, or be forced to put money in a central pot by drawing a "Bum Me Out" card.

Pot Luck originally launched with great fanfare in 1979 by two friends. It was headed for great success, even winning the Best New Product Award, at the 1979 Chicago Gift Show. Unfortunately, during the early 1980's, the timing from Nancy Reagan's "JUST SAY NO" campaign forced all marijuana based businesses to close.

Over the past four decades, Pot Luck has become one of the holy grails of the retro-gaming collectors' movement, with original collectible copies now being offered for sale for over $400 on eBay and Amazon.

Now, society has changed. Pot is mainstream, and the world is ready for this exciting marijuana themed game, Pot Luck.