RIYADH, Saudi Arabia, Nov. 10, 2019 /PRNewswire/ -- To increase Saudi non-oil exports to China, which amounted to more than 120 billion Saudi riyals, HE Bandar bin Ibrahim Al-Khorayef, Minister of Industry and Mineral Resources, Chairman of the Saudi Export Development Authority (SEDA), inaugurated today in the presence of the Secretary General of the Saudi Export Development Authority, Eng. Saleh Al-Salmi, Saudi Pavilion at the China International Import Fair, organized by the Chinese Government, represented by the Ministry of Commerce, held its second session in Shanghai from 5-10 November 2019, covering industry, tourism and services sectors. The exhibition held under the slogan "New Era - A Common Future", was inaugurated this year by the Chinese and French presidents, with the participation of 50 national pavilions representing more than 100 countries. The participation of the Saudi Export Development Authority (Saudi Exports) to organize the Saudi pavilion in the exhibition for the second year in a row with the aim of encouraging Saudi companies to expand and access to international markets, and strengthen economic and trade relations between Saudi Arabia and the People's Republic of China in order to increase the volume of non-oil trade exchange between the two.

The Saudi Arabian General Investment Authority (SAGIA) will also participate in the Saudi pavilion to attract Chinese investments to the Kingdom of Saudi Arabia, as well as the Saudi Commission for Tourism and National Heritage.

This year, under the umbrella of the Saudi Pavilion, a group of Saudi companies will be presenting their products to importers in Chinese markets, participants from various countries, as well as visitors, interested persons and businessmen. His Excellency Mr. Turki Al Madi, Ambassador of the Custodian of the Two Holy Mosques to the People's Republic of China, HE Khalid Al Salem, Director General of Saudi Industrial Property Authority, HE Ahmed Al Kraidees, Vice Chairman of the Saudi-Chinese Business Council, and Eng.

In the context of promoting local products and highlighting global market opportunities, the Saudi Export Development Authority is keen to encourage and encourage Saudi companies to participate under their umbrella in international exhibitions. Competitive quality and delivery of local products to global markets.

The Secretary General of the Saudi Export Development Authority Eng. To open up to global markets, it will also contribute to highlighting the quality of local products to compete with international exporters.

It is worth mentioning that the Kingdom's participation in the China International Import Fair last year achieved several gains, the most important of which was the signing of an agreement between the Ministry of Environment, Water and Agriculture in Saudi Arabia and the General Administration of Customs of the People's Republic of China to export frozen white shrimp from the Kingdom to China, where the agreement aimed to export 40 thousand tons of shrimp During 2018 the value exceeds 500 million riyals.

In addition to export opportunities and trade deals, the China International Import Fair is a leading international trade event and a leading portal to enter the Chinese market. And importers. 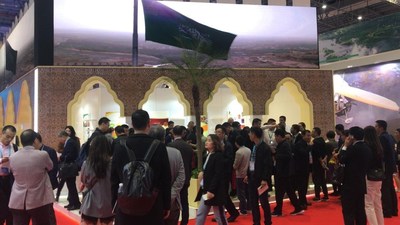