Five Years after Brittany Maynard's Death, Her Advocacy for Medical Aid in Dying Lives On 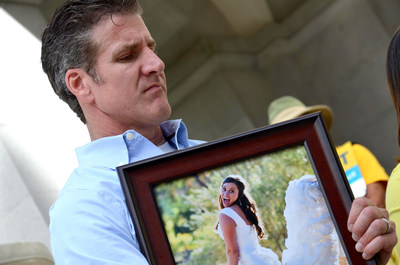 The video is posted at: CompassionandChoices.org/BrittanyFiveYears

The partnership launched on Oct. 6, 2014 with a YouTube video that more than 12 million people have watched. The video describes why Brittany and her family had to move to Oregon, so she could utilize its medical aid-in-dying law to peacefully end her suffering from terminal brain cancer because California did not have a similar law. The campaign generated global digital-media attention, drawing more than six million unique viewers from nearly 240 countries to Compassion & Choices website. A YouGov poll three weeks later the campaign launch in late October 2014 showed 38 percent of American adults ? 93 million people ? had heard her story and knew that she advocated for medical aid in dying.

"Brittany and I then had that conversation, essentially asking, 'Is this something that you can do?' And once we got to that point, then I told her that I would do whatever I possibly could," says Dan Diaz, Brittany's husband, in the new video. "Her story at the end of the day is not about death and dying, it's actually about life and living. She took control of how her final days played out on this green Earth. And in doing so, she made people recognize that we should be talking about how things will play out for each and every one of us."

The People.com story about her death on Nov. 1, 2014 was the biggest story in Time Inc. publication history, garnering more than 16.1 million unique visitors and reaching nearly 54 million people on Facebook, according to Advertising Age.

"It is remarkable to see the progress that we have made in the past five years since Brittany Maynard shared her story," says Kim Callinan, CEO and president of Compassion & Choices, in the new video. "Year after year, we have been able to continue the momentum with new states being added on each year. Brittany is a hero. Her courage is just tremendous. And as a result of her leadership terminally ill Americans now have greater options at the end of life."

When Brittany died on Nov. 1, 2014, there were only four states that allowed medical aid in dying: Oregon, Washington, Montana (via a state Supreme Court ruling), and Vermont, representing one out of 25 people (4%) across the country. Five years after Brittany's call to action, Compassion & Choices' partnership with her husband Dan Diaz, along with the work of other organizations, has prompted the introduction of medical aid-in-dying bills in 25 states, plus Washington, D.C., and the enactment of medical aid-in-dying laws five states: California (2015), Colorado (2016), Hawai'i (2018, Maine (2019), and New Jersey (2019), as well as Washington, D.C. (2017). As a result, today there are 10 jurisdictions where this end-of-life care option is authorized, representing more than one out of five people (22%) nationwide, more than a five-fold increase from five years ago.

"Freedom from prolonged pain and suffering is a most basic human right," Brittany says in the video she recorded five years ago that still inspires people across the ethnic, political and religious spectrum on this issue. "I hope for the sake of other American citizens all these people that I'm speaking to that I've never met, that I'll never meet, that this choice be extended to you. That we mobilize, that we vocalize, that we start to talk about it."

"I am an 81-year-old retired physician living with three cancer diagnoses," testified Dr. Omega Silva at the legislative hearing last year in support of the New York Medical Aid in Dying Act that is included in the video. "I believe prescribing medical aid in dying to peacefully end unbearable suffering is consistent with the Hippocratic Oath."

Compassion & Choices is the nation's oldest and largest nonprofit organization working to expand and improve healthcare options for the end of life, with 450,000 supporters nationwide. For more information, visit: www.CompassionAndChoices.org