CHICAGO, Oct. 22, 2019 /PRNewswire/ -- The "Unsinkable Molly Brown" was an American socialite and philanthropist who amassed a fortune as a woman at the turn of the 20th Century, when women did not even have the right to vote.

Nothing could stop her. She was even a passenger on the Titanic when it sank, yet even that could not sink her, and she survived.

If she were a market, she would be the stock market of today. Despite an earnings recession (please refer to Chart 1), declining investment, a trade war, a weak global economy, an inverted yield curve, and political instability, the stock market keeps going up. The market buckled during a volatile summer of 2019, yet emerged from it just two percent from its all-time high.

The reason is simple. The Fed stands at the ready to steady the ship. Despite Fed Chairman Jerome Powell's public rebuke of President Trump's demand for Fed accommodation, he will ease. The adage "Don't Fade the Fed" was never more timely. 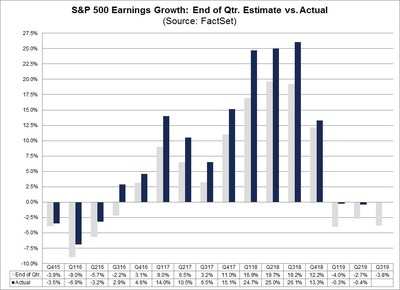 Earnings have declined for three straight quarters, which is officially an earnings recession (please refer to Chart 1). The International Monetary Fund (IMF) in its October World Economic Outlook, said that global growth has slowed to 3.2 percent annually, from 3.6 percent a year ago. "GDP releases so far this year, together with generally softening inflation, point to weaker-than-anticipated global activity, " according to the IMF.

The U.S. Supply Managers also see a slowdown. Both the manufacturing and service sector reports last month were significantly below forecasts, according to the Commerce Department. The unemployment rate might be at a 50-year low, but wages are stagnant, which is slowly eroding the U.S standard of living. And, finally, the bond market has an inverted yield curve, which is market evidence of poor economic expectations. Short term rates are higher than long term rates in the U.S, which indicates that in the future, the economy will not support the current level of interest rates. It will need lower interest rates to induce growth. With this backdrop, the Fed has no choice but to come to the rescue.

Contrary to popular belief, the Fed has plenty of "bullets" to fire on behalf of the economy. Typically the Fed lowers rates by 500 basis points during easing cycles. But that needs to be measured against the level of interest rates at the time. When the Fed lowered the Fed funds rate from 5.25 percent in July of 2007 to 2 percent in September 2008 (Please refer to Chart 2), the crisis continued to escalate, and Lehman Brothers collapsed nonetheless. But when the rate dropped to zero in February of 2009, and the Fed combined that with Quantitative Easing (QE), which is the buying of Treasury and distressed assets, the economy found its legs.

Moreover, in today's markets, the Fed does not have to stop at zero percent. It can follow the lead of much of the rest of the world and push the Fed Funds rate into negative territory. According to a Deutsche Bank report, $15 trillion of sovereign debt in countries, including the Eurozone, is priced at negative interest rates. That amounts to 25 percent of the world's sovereign debt.

Powell is a vocal critic of negative rates, but he is fast becoming a minority as much of the world has adopted them. Even President Donald Trump is a strong proponent of negative rates. As an investor, he realizes the world's bond buyers are more concerned about being paid back than the outright level of yields they receive. These lower short-term rates will liquefy the financial system so that the cost of carrying investments drops substantially, adding to profitability and boosting corporate and investor wealth at a time when the trade war is sapping growth. 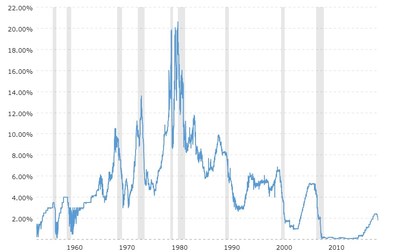 In addition to lowering the Fed Funds rate, the Fed has room to do Quantitative Easing, which is the purchase of Treasury bonds and Mortgage-Backed Securities to lower their rates. This would help homeowners who have been hit hard by the Trump tax plan because of the loss of the deductibility of higher real estate taxes and mortgage payments. The Baby Boomers especially would benefit while they sell their family homes and downsize as their children leave the nest. Right now, those homes are a glut on the market, but with lower borrowing costs, the houses become more affordable and allow the Boomers to retire with lower overhead and more liquidity, and enables the next generation to afford the homes the Boomers are selling.

Meanwhile, the average dividend yield of the S&P 500 is 2.2 percent vs. the 10-year Treasury yield, which is 1.6 percent (please refer to Chart 3). Warren Buffet, a student of the yield value comparisons championed by his mentor Benjamin Graham, recently pointed out this disparity on CNBC and declared stocks "cheap."

Moreover, investors are "underinvested" in stocks. Since the 2008 Crash, most investors have been wary of the stock market. Money market funds have pulled in $322 billion in the past six months, bringing assets to nearly $3.5 trillion, according to Factset and Bank of America Merrill Lynch. Cash is piling up at the fastest pace since the second half of 2008 when investors were licking their wounds from stock market losses. As the stock market sets new records, that money will be forced into the stock market, and, along with the massively growing retirement and pension plan portfolios, will cause a bidding war for stocks. Dividend yields are likely to equalize with Treasury yields, sending the market more than 33 percent higher than it is right now.

Assuming 10-year yields are static and that the market will reach equilibrium when those yields equate to dividend yield, the S&P 500 will reach 3,800.

Molly Brown would be proud.