"He haunts us still"1

TORONTO, Oct. 8, 2019 /CNW/ - Pierre Elliott Trudeau, or "PET" as he was known in his day, is the dominant Canadian cultural and political icon of the 20th century. At a breakfast meeting held in downtown Toronto on October 3, on the 19th anniversary of his state funeral in Montreal, a diverse group of over 100 ordinary Canadians gathered to finalize plans for a non-partisan public celebration of the 100th anniversary of his birth, to be held in Toronto later this month. 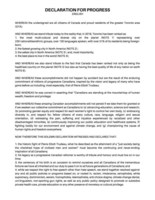 Born on October 18, 1919, Pierre Elliott Trudeau was the third longest serving Prime Minister in Canadian history, holding office for 15 years from 1968 to 1979 and from 1980 to 1984. In order to distance the celebration of his extraordinary life and remarkable legacy from the partisan battles of the current federal election campaign, organizers of the event have announced that his tribute celebration will be occurring in Nathan Phillips Square, weather permitting, on Saturday evening, October 26.

The "Party for Pierre" or "P4P", as it has been dubbed, will be a free public concert beginning at 7:30 p.m., sponsored by the newly-formed not-for-profit "P4P Foundation". The evening will include performances by both prominent and newly emerging Canadian musical artists, interspersed with personal tributes from eminent Canadians from every walk of life. The tribute, a celebration of Canadian values, is being promoted to the nation as a "Popular Uprising of Progressive Canadians".

At the P4P, thousands of Canadians who admire the Pierre Elliott Trudeau's lasting contributions to Canadian life today will be celebrating so many of his accomplishments for ordinary Canadians in building a more "Just Society" and keeping Canada progressive and united, including:

At their breakfast meeting this morning, founding members of the P4P Foundation adopted a Declaration for Progress (attached) and, in doing so dedicated themselves to reminding Canadians that the legacy we have all inherited from Pierre Elliott Trudeau is so unique on this planet that it can never be taken for granted. They also invited their fellow citizens to join them in celebrating Pierre Elliott Trudeau's life and legacy on the 100th anniversary of his birth in cities, towns and rural communities across Canada, from coast to coast to coast.

P4P Foundation specifically invites the millions of Canadians who share Pierre Elliott Trudeau's vision of a more just, peaceful, diverse, prosperous and progressive Canada as the hope of our planet. All Canadians are invited to join in the P4P, including millennial and post-millennial Canadians who never knew him but live in his legacy today, especially those who are:

Over the coming weeks, as part of the lead-up to the P4P, organizers will be releasing (1) a series of tribute videos from ordinary Canadians, (2) the names of the many Canadian artists who will be performing at the event, and (3) the identity of prominent Canadians from the spheres of sport, entertainment, politics and business who will be delivering in-person and video tributes to Pierre Elliott Trudeau in Nathan Phillips Square on October 26, 2019.

We hope Canadians from everywhere will join us in shouting "Thank you Pierre" and "Welcome to the 2020's".

1 from Trudeau and Our Times (1990), Stephen Clarkson and Christina McCall