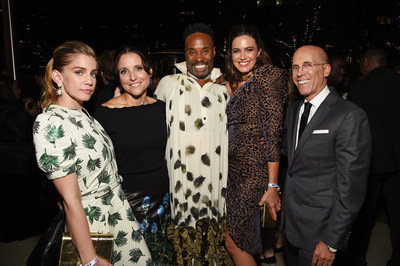 The television industry, from Emmy presenters and nominees, to other TV industry members, helped raise funds to support their industry colleagues and friends who benefit from MPTF's charitable programs and services such as financial assistance, crisis counseling, care giving support and of course the legendary retirement facility in Woodland Hills that is "home" to television and film veterans alike.

"MPTF's Evening Before once again brought our industry together in the spirit of a community that truly takes care of its own.  We're incredibly grateful for the generosity of the corporate sponsors and donors from the television community who came out to support and sustain our mission," said Jeffrey Katzenberg, Chairman of the MPTF Board of Governors.

The "Evening Before" was designed as a relaxed town square atmosphere in the park by Silver Birches with specialty food provided by Carmelized Productions by Jon Shook & Vinny Dotolo.

The event is designed after the highly successful "Night Before," another fundraiser held annually before the Academy Awards® for the past seventeen years to benefit MPTF.

About Delta Air Lines
Delta's mission to connect the world starts with its commitment to being a strong partner to the communities where employees live, work and serve. Giving back is core to Delta and its culture, demonstrated by its commitment to invest one percent of net income to charitable organizations each year. Delta, The Delta Air Lines Foundation and its employees contribute thousands of volunteer hours and millions of dollars to a host of causes across the globe. Delta Air Lines was named to Corporate Responsibility (CR) Magazine's annual 100 Best Corporate Citizens ranking, recognized for outstanding environmental, social and governance transparency and performance amongst the 1,000 largest U.S. public companies. Delta Air Lines has also been named an honoree of The Civic 50 by Points of Light, the world's largest organization dedicated to volunteer service. The award recognizes Delta as one of the most community-minded companies in the United States for the second year in a row.

About Netflix
Netflix is the world's leading internet entertainment service with over 151 million paid memberships in over 190 countries enjoying TV series, documentaries and feature films across a wide variety of genres and languages. Members can watch as much as they want, anytime, anywhere, on any internet-connected screen. Members can play, pause and resume watching, all without commercials or commitments.

About PEOPLE
Meredith Corporation's PEOPLE revolutionized personality journalism when it launched as a weekly in 1974 with a mission to celebrate extraordinary people doing ordinary things and ordinary people doing extraordinary things.  Ubiquitous and still at the center of pop culture more than 45 years later, the PEOPLE brand is accessible across all media and platforms (print, digital, video, OTT, mobile, social) bringing more than 100 million consumers a unique mix of breaking entertainment news, exclusive photos, video, unparalleled access to the red carpet, celebrities, and in-depth reporting on the most compelling newsmakers of our time. An essential component of PEOPLE's editorial vision remains human interest stories, which touch and often mirror the lives of our passionate audience. ComScore ranks the PEOPLE/Entertainment Weekly Digital Network No. 1 in the entertainment news category.

PeopleTV, the advertiser-supported OTT streaming service from PEOPLE and Entertainment Weekly that launched in 2016, features original series and specials focusing on celebrity, red carpet, pop culture, lifestyle and human-interest stories. PEOPLE is an award-winning 24/7 news organization headquartered in NYC with reporters worldwide. For more information visit PEOPLE.com and follow @people on Twitter and Instagram, @peoplemag on Facebook, and the PEOPLE channel on YouTube and on Snapchat's Discover.

About Target
Minneapolis-based Target Corporation serves guests at more than 1,855 stores and at Target.com. Since 1946, Target has given 5% of its profit to communities, which today equals millions of dollars a week. For the latest store count or more information, visit Target.com/Pressroom. For a behind-the-scenes look at Target, visit Target.com/abullseyeview or follow @TargetNews on Twitter.

About MPTF
MPTF (Motion Picture & Television Fund) supports the entertainment community in living and aging well, with dignity and purpose, and in helping each other in times of need.

What began more than 97 years ago as the Motion Picture Relief Fund has, today, flourished into MPTF, a comprehensive service organization that remains at the core of the entertainment industry.

The entertainment industry has a longtime history of taking care of its own like no other industry in the world. People are at the heart of what MPTF does each day, and it is the extraordinary generosity of countless donors, families, and volunteers that enables the organization to deliver services to industry members in need.