BROOKLYN, N.Y., Aug. 15, 2019 /PRNewswire/ -- Sixpoint Brewery, a pioneer in the New York craft beer scene, is building a new state-of-the-art brewery and taproom in Gowanus, Brooklyn, set to open in May 2020. The 20,000 ft2 space will feature a production brewing system, a full-service kitchen and bar, a street level outdoor beer garden, and a 4,000 ft2 rooftop beer garden with stunning views of the Brooklyn and Manhattan skylines.

"This has been a long time coming, and we're making sure we do it right," says Eric Bachli, Sixpoint's Brewmaster.  Bachli, who joined from cult craft brand Trillium in 2017, couldn't be more excited about the new space. "We're working with Braukon, one of the most highly regarded manufacturers of brewing equipment in the world, on the buildout of their first brewery installation in New York City. It truly is a world class facility equipped with everything a brewer could dream of. The basics of the system are all there, but we added components to this buildout that allow us to push the boundaries of innovation.  We will have a mix of horizontal lager tanks and cylindroconical vessels to brew an expansive range of ales and lagers.  There is a coolship, horizontal foeders, a dedicated kettle souring vessel, and a barrel program to give our team great flexibility in style and taste profile as we build innovative new beers."

Sixpoint's story begins in 2004, when Shane Welch opened a tiny 800 ft2 garage brewery in Red Hook, Brooklyn. Sixpoint became known for innovative formulas, such as Resin, Sweet Action and Jammer.  These iconic brands were only available on draft around cutting edge New York bars and restaurants, like Barcade, Kettle of Fish, Union Pool and Hometown Barbeque.  Sixpoint continued to grow and evolve, launching in cans in 2011, and soon becoming one of the most popular beer brands in New York City. Without the benefit of a retail taproom, Sixpoint continued its consistent drive of innovation through pop-up can release parties, where the beer was sold at its Red Hook facility, using a unique app. The brand became known for these small batch can releases, where brands like Lil' Raspy, Party Pinata, and Hootie, which is now available across New York, were born.  Sixpoint is also a frequent collaborator on unique beers with other popular breweries like Sloop, New Realm, and Beer'd.

The new taproom will bring a unique experience to the New York craft market. Located on the corner of 9th Street and 2nd Avenue in Brooklyn, the historic warehouse building was first constructed in 1904.  The space will be very authentic and welcoming featuring huge windows, 16-foot ceilings, heavy timber columns and beams, and exposed brick.  Sixpoint's taproom will feature a year-round rooftop with sweeping views of the above-ground, F and G subway line that passes directly overhead and dramatically crosses the Manhattan skyline. The full-service taproom and rooftop bar will have 30 taps and a cutting-edge menu.  The design, which is a collaboration between Sixpoint and architecture firm, Gerner Kronick + Valcarcel (GKV) will be influenced by the building's unique story, the uniqueness of the Gowanus neighborhood, and the history of the Sixpoint brand and its connection to its Brooklyn roots.  GKV has designed iconic New York projects like the Ford Amphitheater on Coney Island, Zuma NYC, and the Beekman Hotel.  The project is being developed by Industries Capital Partners (ICP), a premium Brooklyn focused developer. ICP is curating a set of innovative food and beverage businesses and creative office tenants to occupy the space.

"We are very excited to welcome Sixpoint brewery to this amazing creative office and retail project in Gowanus. Sixpoint is an ideal tenant for this cool neighborhood and will become the epicenter in the Gowanus area for experiential retail and creativity," says Joseph Hamway, principal of ICP.

Bachli says that the new brewery and taproom is the Sixpoint motto, "Beer is Culture," fully realized.

"Above all, it's a place for people to gather, taste wonderful beverages, and explore everything that beer can be.  They will enjoy the heart and soul that we, as brewers, put into creating beer." 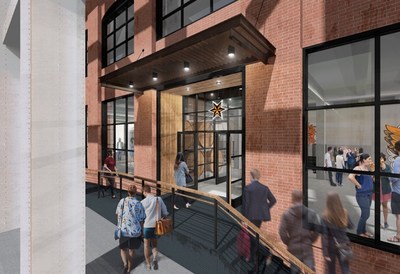