GUATEMALA CITY, Aug. 6, 2019 /PRNewswire/ -- A few days ago, Dionisio Gutiérrez met with Larry Holifield, former official of the Drug Enforcement Agency (DEA) for Central America and Mexico. Holifield is an expert in intelligence and operations against transnational criminal organizations that threaten the security of the United States, to discuss about the importance of the fight against drug trafficking in Latin America. 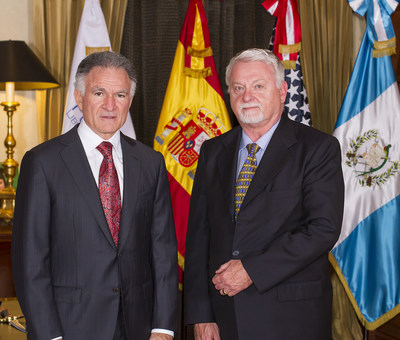 Dionisio Gutiérrez began the conversation referring to the elements that Guatemala gathers to be considered a narco State and the poor efforts that are often made in this country to fight against this scourge, "the division between drug trafficking and politics must be critical for Guatemala, because if this continues, we will end up being more than a narco State: we will be a criminal State."

Holifield agreed and added, "As head of the DEA for the region, I spent five years in Guatemala, from 1987 to 1992; working side-by-side in intelligence operations with the Guatemalan State, we had the will and the support of the citizens, the government and the army in our operations. The willingness of governments is essential.  Now, when I speak with my agents here, they mention that they are alone, that they feel that they do not have sufficient resources to work. They feel that money and effort has been wasted in financing these programs with Guatemalan officials who are involved one day but not the other. For this reason, Guatemala is uncertified to receive government financing from the United States in certain categories, such as the police force."

Finally, Gutiérrez explained, "we have the elements to qualify as a narco State because our courts, congress, police, and army are involved in illicit activities, as well as, a large part of our political system. The problem with drug trafficking will not go away, for that reason, we need to find strategies to confront it."

This meeting is part of a series that Dionisio Gutiérrez is holding with officials from the North American State to address security problems of the North Triangle in Central America.