GUATEMALA CITY, Aug. 5, 2019 /PRNewswire/ -- Recently, the Guatemalan businessman and journalist, Dionisio Gutiérrez, met with Leslie Alessandra, a former senior special agent of the FBI in charge of topics of Latin America and a specialist in corruption, money laundering and drug trafficking to discuss transnational and hemispheric security and the importance of the fight against drug trafficking in Latin America. 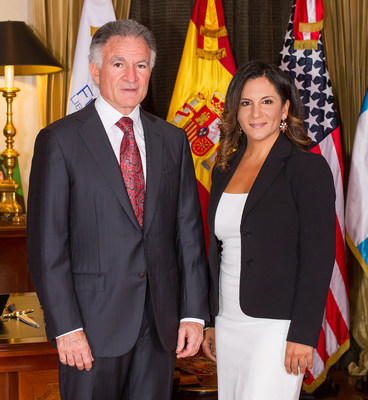 Dionisio Gutiérrez began the conversation mentioning that the former official left her position in the FBI a month ago and that now she is transitioning towards another North American government agency.  In reference to the joint effort of the nations that are mutually interested in crime reduction in their territories, he commented, "Throughout the years, I have learned how security agencies in the United States operate and how engaged they are with the region, but I also know that there are contradictions, misinformation and confusion.  We, Latin Americans, expect North Americans to solve our problems, that they will come to apprehend the bad guys and remove them from our path."

Leslie Alessandra agreed and added, "As you know, I left the FBI a month ago and can tell you that in my experience, most investigations in which I worked tracking down transnational criminal networks, specifically narco-corruption, depend mainly on the countries with which we work to be able to successfully culminate the cases. We try to work side-by-side with local governments and we rely on their legal systems and their police force to be able to bring these criminals to justice. Therefore, if these systems are corrupt, we cannot do our job for the security of the United States and the region."

Finally, Gutiérrez explained that, "Around 75 percent of the financing of political parties in Guatemala comes from corruption and drug trafficking. This means that we are losing our country due to these criminal structures in our State. The solution and the answer to our problems are in politics. Guatemala suffers due to political underdevelopment. Its elites did not evolve. And most of the citizens who decided to be part of the political elite, are mainly motivated by power, not providing solutions."

This meeting is part of a series that Dionisio Gutiérrez is holding with officials from the North American State to address security problems of the North Triangle in Central America.