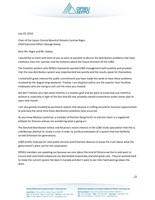 In a letter to the executives, Thomas pointed out that the frontline LCBO employees whom OPSEU represents warned that a new distribution system was hastily rolled out before it was ready.

He also expressed doubts about Soleas's public commitment that the distribution problems will be resolved in two weeks.

"Frankly, I am skeptical and so are the experts: Your frontline employees are trying to sort out the mess you created," Thomas wrote. "We don't believe your two-week timeline is a realistic goal, and we want to know how you intend to achieve it."

Thomas also wants to receive some assurances from Nigro and Soleas about the LCBO's future in light of ongoing reports that privately owned alcohol retailer Alcanna is trying to gain a toehold in Ontario. Alcanna has hired Melissa Lantsman, a member of Premier Doug Ford's re-election team and a Ford insider, as a lobbyist.

"It's time for this government to come clean about the LCBO's future," said Thomas. "This information vacuum is creating speculation that the distribution fiasco is a deliberate pretext to justify full-fledged privatization."

With the first 60 of 200 privately owned convenience outlet shops opening next month, Thomas says the Ford government won't want the embarrassment of having empty store shelves.

"These 200 stores are the centrepiece of Ford's plans to further privatize alcohol sales," said Thomas. "In light of his cannabis fail, Ford will likely attempt to do anything to ensure they don't fail. Does that include privatizing the LCBO distribution to a firm with close ties to his office?

"OPSEU members at the LCBO have worked hard for decades to ensure alcohol is kept out of the hands of minors and those showing signs of impairment. We aren't going to stand by and let that go down the drain so a few Ford cronies can line their pockets."