OTTAWA, June 14, 2019 /CNW/ - On Monday, June 17, members of the Save Canadian Jobs Coalition will hold a joint press conference to call on Members of Parliament to support the Senate's original amendments to Bill C-69, an Act to enact the Impact Assessment Act and the Canadian Energy Regulator Act, to amend the Navigation Protection Act. 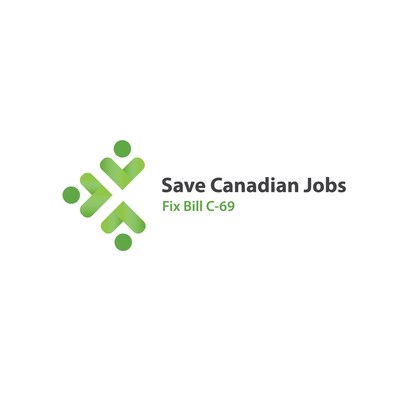 The government has rejected many of the amendments proposed by Senators, and in doing so, has reverted Bill C-69 to vague guidelines that will be subject to challenge in court, longer and uncertain timelines, and politicization of the regulatory review process. This is a blatant disregard for the warnings from industry and other stakeholders that the bill will drive investment out of the country, put Canadian businesses and jobs at risk, and impair Canada's economic growth and potential. This hurts Canadian quality of life.

Industry leaders and Indigenous groups will come together to share joint concern about the government's decision to reject key amendments to Bill C-69 that will provide clear and concise rules for the development of future projects.

Media are invited to attend the press conference. Details below.

The Save Canadian Jobs Coalition is a coalition of concerned industry groups, associations, and citizens across Canada. It is calling for support for the amendments to the Federal Government's misguided Bill C-69, An Act to enact the Impact Assessment Act and the Canadian Energy Regulator Act, to amend the Navigation Protection Act and to make consequential amendments to other Acts.

For more information about the Save Canadian Jobs Coalition:
http://www.savecanadianjobs.com