CHICAGO, Jan. 3, 2019 /PRNewswire/ -- Robert Morris University Illinois (RMUI) is offering thousands of dollars in graduate school tuition savings along with more undergraduate scholarship money for high-need students. The move is a first of its kind for graduate tuition at RMUI. 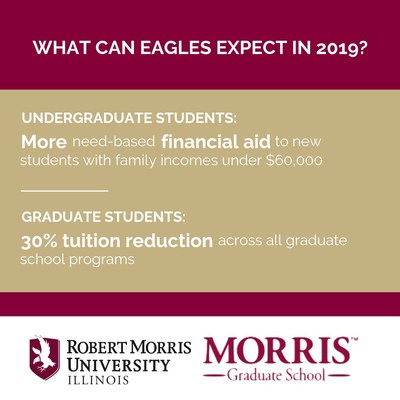 The Speed Ahead graduate tuition reduction program reduces tuition by 30 percent across all graduate school programs. For undergrads, RMUI is giving more need-based financial aid to new students with family incomes under $60,000. The two initiatives will create more opportunities and fewer financial barriers.

"Now more than ever, it's important that cost for college should only be a consideration, not a crippling factor," RMUI President, Mablene Krueger said. "Our new cost-savings initiatives will ultimately increase our accessibility and affordability, so we can support a greater number of students along their educational journeys."

The savings will begin in February 2019 for graduate students and July 2019 for undergraduate students. For example, an incoming MBA graduate student will save $14,000 during the course of their graduate degree. Qualifying undergrads may receive up to $39,000 toward a bachelor's degree in need-based aid awards, depending on Estimated Family Contribution, which is determined by FASFA.

"This is exciting because you don't typically see initiatives take place like this at the graduate level in higher education," RMUI's Dean of Graduate Studies Dr. Kayed Akkawi said. "This proves RMUI's commitment to instilling next-level readiness for its graduate and undergraduate students. This is a big win for higher education and students who choose RMUI."

RMUI is currently recognized by U.S. News & World Report as the most diverse university in the Midwest. The accolade can be partially credited to RMUI's already affordable programs, which attract a diverse pool of candidates. A large portion of RMUI's population are first-generation students who typically lack the family income needed to fund their education. RMUI's tuition reduction and revamped scholarship model are all the more critical given America's $1.5 trillion student loan debt crisis.

"I want to pursue a graduate degree because it opens so many opportunities," RMUI senior, Jordan S. said, who is a business management student. "I will be the first in my family to graduate from college, so financially, it's really difficult [to obtain bachelor's and master's degrees], but I'm in a better position to get both with RMUI's help."

With seven campuses across Illinois, RMUI remains committed to providing an experienced-focused education based on real-world curriculum to help all students get ahead of the curve with fewer financial burdens. To learn more about RMUI, visit speedahead.robertmorris.edu.