COLUMBUS, Ind., Sept. 19, 2017 /PRNewswire/ -- Toyota Material Handling U.S.A. (TMHU), commemorated the 50th anniversary of the first Toyota forklift sold in the U.S. with a special event for dealers, associates, dignitaries and media at its U.S. forklift headquarters in Columbus, Indiana. The company, which holds the title as the number one forklift in North America, sold its first U.S. forklift to a grape farmer in Fresno, California, in 1967. Fifty years later, Toyota proudly displays that forklift at its Columbus campus as a reminder to visitors of the brand's quality and longevity. 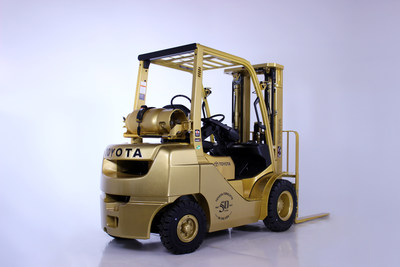 "Fifty years represents a golden achievement in the U.S. and to celebrate we honored the associates, dealers, our suppliers and the community who supported TMHU's journey to this major milestone," said Brett Wood, president and CEO of Toyota Material Handling North America. "This anniversary underscores our legacy here in the U.S., but also gives us a glimpse into the future of Toyota Forklifts' ongoing leadership and growth in the rapidly changing material handling and logistics industry."

Toyota Forklifts invited its 66 dealers representing more than 220 locations in the U.S. and Canada to join the 50th anniversary festivities. Toyota's vast network of professional dealers is often credited as a key ingredient in TMHU's success. The dealers on hand at the event presented TMHU officials with a plaque of appreciation for the support and leadership provided to them over the previous five decades.

To mark the golden anniversary, Toyota associates custom-designed, engineered and built a gold-painted forklift, which was unveiled at the recent milestone ceremony. Toyota Industries Corporation (TICO) executives presented TMHU with a ceramic roof tile sculpture. The ancient roof tiles, called Kawara, are from the Takahama region of Japan, and signify the exceptional workmanship that is a recognized quality of all Toyota products. 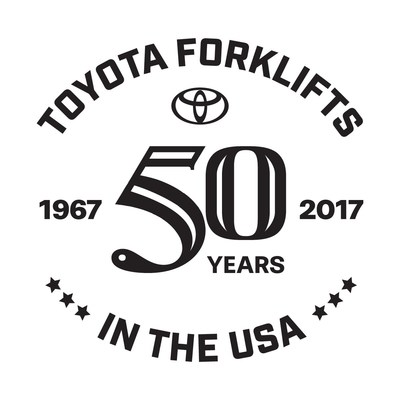