MINISTER'S THOUGHT OF THE DAY

"We're off and running! After more than two years of pandemic delays, Montréal and Canada have stepped up to host this generationally significant conference. For Canada, I underlined our commitment to protect thirty percent of lands and waters by 2030 during this morning's opening press conference, alongside the Chinese U.N. presidency. And, led by Prime Minister Trudeau during the official opening ceremony, we announced a new investment of $350 million to support developing countries to take action on nature conservation."

The Honourable Steven Guilbeault, Minister of Environment and Climate Change

QUOTE OF THE DAY

"We have but a few days to act decisively and with principle, and action must be bold, not bracketed, so that we can get this deal done. We got an extra two years from the scourge of COVID, let us not squander that. Rather, let us make sure that we deliver, and deliver for people and for planet, because once adopted the Global Biodiversity Framework will serve as a plan to conserve, to sustainably use and to rebuild the web of life."

PHOTO OF THE DAY 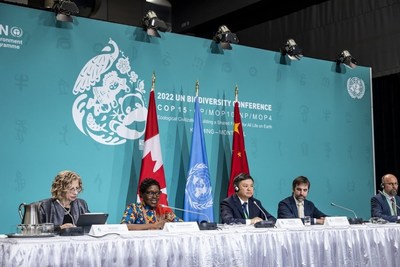 Event: NatureBus: The Nature Canada tour bus has travelled across the country collecting messages that will be shared with Minister Guilbeault in Montréal.
Time: 12:00 p.m.