A FIRST MONDOU FUNDRAISING CAMPAIGN FOR THE CHUV OVER THE HOLIDAY PERIOD: FOR THE LOVE OF ANIMALS AND OF THEIR HEALTH

With the aim of acquiring a new scanner to train future veterinarians, the Mondou Mondon campaign for the Centre hospitalier universitaire vétérinaire will run from December 1 to January 16, 2023

MONTREAL, Nov. 30, 2022 /CNW Telbec/ - Mondou is very proud to launch the first-ever edition of its Mondou Mondon campaign for the CHUV (Centre hospitalier universitaire vétérinaire), tomorrow. This major fundraising campaign, which will run from December 1 to January 16, 2023, aims to raise funds to acquire a new scanner, which will be used by the students of the Faculty of Veterinarian Medicine of the University of Montreal during their academic journey. Mondou therefore calls upon its loyal customers to give generously, through a number of means, in one of the 80 Mondou stores across Quebec or online at Mondou.com. 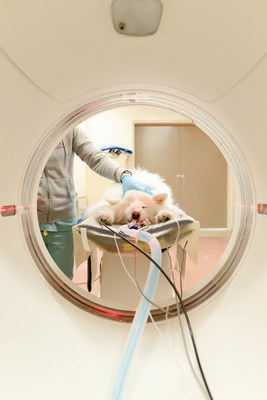 "It is vital to provide future veterinarians with cutting-edge tools, like the new scanner the CHUV wishes to acquire, to continue to diagnose and treat our animals. As a family-run business established in Quebec over 80 years ago, Mondou's mission is to give back to the community, as evidenced by this new fundraising campaign, which represents a means of supporting an internationally-recognized institution," said Pierre Leblanc, Mondou's general manager.

HOW WILL THE DONATIONS BE USED?

The funds raised during the Mondou Mondon campaign for the CHUV will be directed towards the purchase of a new scanner, to ensure that the veterinarian hospital remains at the forefront of technology so that it may continue to provide quality care to the animals of Quebec.

Located in Saint-Hyacinthe, the CHUV offers a clinical expertise, premium care and client experience, centered on the well-being and health of animals.  At the heart of a veterinary teaching and research faculty, it constitutes a unique platform for the education and the advancement of knowledge of veterinarians and specialists. Recognized for the quality of its care and client services, the CHUV is a referral centre and a leader in animal health in Quebec, in Canada and in the international francophone community.

The CHUV treats on average more than 25,000 animals each year (domestic, farm, exotic and zoo animals, as well as horses and birds of prey), thanks to a multidisciplinary team consisting of 75 professors, 108 employees, 27 interns and 18 residents. Some of its services include surgery, medical imaging, internal medicine, dentistry, dermatology, sports medicine, reproduction, ophthalmology, neurology and spaying and neutering of pets.

Mondou invites the public to contribute to this all-new cause through various means, in store or online:

It should be noted that 100% of profits will be donated to the CHUV foundation.

$500,000 RAISED FOR MIRA FOR THE SECOND CONSUCUTIVE YEAR  AND OVER 80 YEARS OF COMMUNITY INVOLVEMENT!

With animal welfare and the well-being of its community members at the core of its mission, Mondou held the 8th edition of its Mondou Mondon campaign for the Mira Foundation from September 29 to November 13, which raised $500,000. Since the launch of this initiative in 2015, a grand total of more than $3 million has been donated to this foundation that changes the daily lives of thousands of individuals with visual or physical impairments or with autism spectrum disorders, thanks to its guide dogs and service dogs.

In addition to its Mondou Mondon campaign for the MIRA Foundation, Mondou has been organizing the Mondou Mondon campaign for shelters, which raised nearly one million dollars over the last five years. As a firm believer in responsible adoption, the 100% Quebec-based company has inaugurated four adoption zones for cats from rescue shelters at its Saint-Jérôme, Anjou, Saint-Jean-sur-Richelieu and Joliette store locations since April 2019.

Mondou invites the public to give generously during the Mondou Mondon campaign for the CHUV and thereby help build the future for our new veterinarians!

Founded in 1938 by Montreal entrepreneur Joseph-Émilien Mondou, Mondou is a Quebec-based, family-run business that provides products, services, and advice intended for the health and well-being of pets of all kinds. Since the Legault family purchased this highly-successful Québec-based venture in 1983, the company saw its number of stores rise from one to 80 thanks to the exceptional commitment of its passionate employees, who now number more than 1,100 across Quebec. Much more than a mere pet food store, Mondou distinguishes itself from its competitors by the expertise of its team of skilled advisors and by its commitment to refrain from selling animals. With animal welfare at the core of its values, Mondou is strongly committed towards its partner organizations and advocates to further advance the cause of animal welfare through the implementation of several initiatives. For more information, visit www.mondou.com.