MORGANTON, N.C., Oct. 6, 2022 /PRNewswire/ -- In June at just 17, Gray Leadbetter made history as the first woman to win a Championship Off-Road pro race. At the start of the season, driving a new truck for a new team in a new class, Leadbetter said she just wanted to finish. By season's end, she had done so in convincing style with four wins and two seconds. Driving the Ryan Beat Motorsports #28 Bilstein Chevrolet, she went into final race tied for the lead. With a 3rd place finish, Leadbetter clinched the championship by just 3 points and made history again, as the first woman to win it all with a Pro Class Championship. 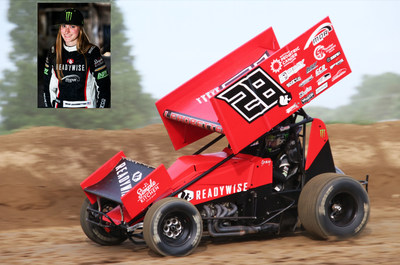 Competing in off-road trucks is just a sideline to Leadbetter's regular schedule. On most weekends, she's out there with her sponsor, ReadyWise food, on the dirt ovals of rural America, paying her dues as one of the few women in the rough and tumble world of sprint car racing. With over 900 horsepower and a weight of only 1400 pounds (including driver), a sprint car delivers an insane power-to-weight ratio ? superior to that of a Formula 1 car.

On November 2 to 5, Leadbetter will be in Charlotte, NC for four-days of mayhem known as the World Of Outlaws World Finals. This is where the top sprint car drivers in the world meet to decide who is the best of the best. Leadbetter attended the event for the first time last year. "It was sensory overload to be sure," said Leadbetter who was in her first year of driving a sprint car. "The sheer scale of the event, the atmosphere, the crowd, and the intense competition, there's nothing quite like it."

This year, Leadbetter will be there with her sponsor, ReadyWise, the maker of freeze-dried foods and Simple Kitchen snacks. With a shelf-life of up to 25 years for meals, ReadyWise is a leading producer of emergency food supply kits. No refrigeration is required, so nutritious ReadyWise meals are also popular with outdoor enthusiasts such as campers, hunters and hikers. Use the code: GRAY28 to receive a 10 percent discount. To order or learn more go to: readywise.com